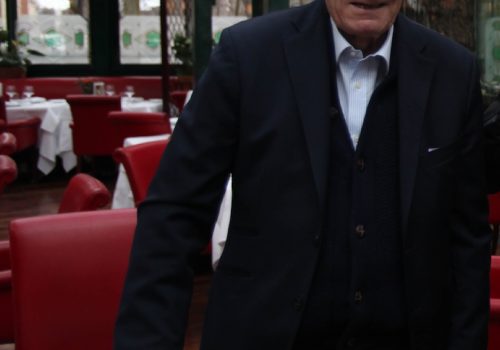 Back in September 2019, we published this article on the occasion of the release of his book.

Hubert Henrotte! He is one of the mythical names in the history of photojournalism! He too was swept away by the drastic technological changes of the 2000s. Today, he is publishing his beautifully titled book: Can photojournalime save the press? He asked us to publish this excerpt: the interview is by Clément Thiery.

On July 4, 2009, Business Insider’s economic news site reported that 105 US newspapers had disappeared since the beginning of the year. An hecatomb! But the context explains such a figure. A recession had hit the United States and the first tremors of the arrival of the Internet were felt: with the loss of advertising revenue to the web, many press titles had ceased to appear. The dead: Tucson Citizen (Arizona), Rocky Mountain News (Colorado), Baltimore Examiner (Maryland), Kentucky Post (Kentucky), Cincinnati Post (Ohio), Honolulu Advertiser (Hawaii), Village Voice (New York) or, the most recent example, the Weekly Standard, a conservative weekly published in Washington DC.

More than 10 years after the economic crisis of 2007-2008, the decline of the papers continues. According to the Pew Research Center, 36% of the largest US publications fired employees between January 2017 and April 2018. According to the same source, the number of Americans employed in the media sector fell by 23% between 2008 and 2017 The average circulation of daily newspapers has fallen by 11% in 2017. A note of hope: Among The 15 largest American dailies by their circulation appear eleven regional titles: the Houston Chronicle (Texas) , the Chicago Tribune (Illinois), the Los Angeles Times (California), the New York Post (New York), Newsday (New York), the Seattle Times (Washington State), the Boston Globe (Massachusetts), New York Daily News (New York), Dallas Morning News (Texas), Tampa Bay Times (Florida) and Denver Post (Colorado)

According to The Economist, extra-local titles seem particularly resistant to the crisis. These newspapers provide information that their readers do not find in the national or regional press: this niche market and the loyalty of their readership allows them to survive.

Will the web save the print media? No. But will the web save the press in general? Yes. A reader who reads the New York Times on his cell phone, tablet or computer remains a reader: he paid a subscription. The New York Times, which released its results on November 1, has one million paper subscribers and three million web subscribers. The Times saw its web subscriber base grow by 42% in 2017 and the Wall Street Journal by 26%.

The question is not that of the struggle of the paper against the web, but that of the transfer of readers. How to make paper subscribers subscribe on the web? How to ensure that Internet users, accustomed to the free web, pay to read online content? These are the questions facing all newsrooms today.

It is likely that the web will end newspapers as they exist today, yes. But that does not mean that the web will make the press and journalists useless. Journalists will continue to observe, understand and testify, and even comment on the news. Their articles will be published online instead of being printed.

With regard to the daily general information press, the struggle of the paper against the web is a lost cause. (This is another question for specialized titles and periodicals.) Publishing an article online is faster, easier and cheaper than posting the same article on a newsprint page. Another advantage of the web: interactive content (photos in relief, videos, graphics, maps, animations, etc.) that enrich the reading experience and the journalistic content.

At a time when information is falling into a continuous cycle, paper can not fight against the web on equal terms. It takes twenty-four hours (86,400 seconds!) Between two New York Times prints. By the time a news item is formatted, printed and mailed to subscribers and newsstands, a website will have published the information. The printed newspaper is too slow to win the information battle.

Radio didn’t die when television was born: it has reinvented itself. Same thing for newspapers. It is up to each editor to rethink the tone and format of his articles to offer original and paper-based content. The example of the weekly Le 1, launched in France in 2014, is interesting: rid of the constraints of a daily edition, the title has time to develop each topic in depth. It does not compete with dailies and remains different from other weekly news magazines. This niche positioning benefit the publication.

The Web: the solution for photojournalists?

The web represents an almost infinite expression space, without restriction of format, pagination or volume. In this sense, a website offers more freedom to a photojournalist than a print media title.

As a result of this unlimited freedom, the value of an image published on the web is pulled down. On the site of the Getty image bank, a “News” type photograph costs 499 dollars in 300 dpi format (for paper use) and 175 dollars in 72 dpi format (for web use). The Shutterstock image bank offers even lower rates: one of the professional offers can buy up to 750 high-resolution photos for $ 199 per month, the equivalent of 27 cents per image!

The online media, if they offer an Eldorado of freedom and publication space, have not yet found the economic model that will allow them to properly pay their photographers. “I’ve already been getting pictures for 10 euros on the internet,” says William Roguelon, a twenty-seven-year-old photojournalist who has covered the conflicts in Syria and Ukraine on his own. “Your reportage cost you 1,500 euros and you sell ten images, which equates to a unit cost of 150 euros. So you lose money. You have a knife under your throat to sell your images because otherwise you can not go back to reporting. ”

The photojournalist Bruno Amsellem, famous for his images of the Rohingya people in Myanmar, agrees: “A photographer from the Sipa agency showed me his statement: he received forty-six cents for a photo published on the website of a major national newspaper. Me, at this price, I stay at home. ”

Many press titles have today reduced or even eliminated their teams of salaried photographers to entrust their production of images to freelance photographers, wire agencies or image banks.

According to some estimates, Google and Facebook share 85% of online advertising revenue worldwide. The two platforms form a duopoly that could reap 335 billion dollars by 2020 – the equivalent of Ireland’s GDP!

The online advertising services that Google and Facebook sell to the media keep the vicious circle. These tools place advertising inserts on the website of a newspaper or magazine that correspond to the content of each page and receive a percentage of the revenue in return. In short, press titles depend more and more on the two giants to earn an income from advertising.

Some media are now working on an alternative business model: disguised advertising in the form of sponsored articles or product placement, a free website but with a “premium” version on paper, no advertising at all, and a system for advertising. paid membership, etc.

A few days ago, I received this lovely note from Hubert Henrotte:

“When reading the whole thing, I have a serious reaction. We have the impression that photojournalism is dying in France mainly. Not in the United States. And this is very serious, do not let go, you have to fight. For this reason, I regret the title chosen, I should have put Photojournalism can save the press and not with a question mark. This is a mistake on my part.”