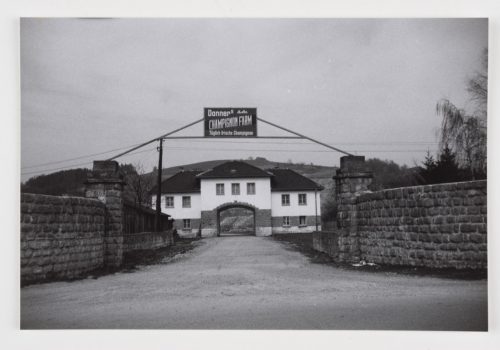 Heimrad Bäcker started photographing the premises of the Mauthausen and Gusen concentration camps in the 1960s—long before remembering Nazi atrocities became a collective endeavor in Austria. The project became an extensive photographic record of the initially abandoned and later repurposed site: an inventory of a place in more than 14,000 photographs.

Bäcker, whose work as an author and publisher stands out in Austrian literature after 1945, saw Mauthausen and Gusen as realms of memory in the sense of the French historian Pierre Nora. Nora coined the phrase lieux de mémoire to describe places where collective memory becomes manifest, thus allowing a culture of remembrance and historically motivated identity formation to emerge. In contrast to Nora, Bäcker was not primarily interested in national concerns but rather in taking responsibility for one’s knowledge and coming to terms with it.

In 2015, Heimrad Bäcker’s photographic estate was donated to mumok by his stepson Michael Merighi. It comprises a body of work whose 14,000 individual items bear witness to a lifelong investigation of a place and the Nazi mass extermination it implies. In this exhibition, mumok will show a selection of about 140 photographs, notes, text-based works, and found objects. The photographs depict vacant facilities either overgrown by plants or deliberately given a new use. Often, these pictures feature gradual differences in the editing process and are mounted serially.

The images and texts provide insight into Bäcker’s approach and can be seen as parallels of his text-based works nachschrift (1986) and nachschrift 2 (1997), which aim to edify us about the Nazi regime and the Shoah as a “cognitive work about the genesis and structure of the Holocaust” (Thomas Eder). It is a collection of quotes from the perspective of perpetrators, victims, the accused, and the accusers, creating a narrative of annihilation by means of texts and language. Excerpts from nachschrift can be heard in the exhibition in a recording of Bäcker himself. The artist spoke of a “possibility of concretion” with regard to nachschrift. Its exclusively found pieces of text share a certain kinship with Bäcker’s photographic search for traces and also make the found objects more accessible: items collected on the premises, be they small nails or larger wood or concrete fragments. Bäcker sought a form of narration that was based on verifiable documents. He refrains from “ideas and speculation,” as he called it, to bring his texts and photographs of Mauthausen and Gusen into position, against forgetting.

Heimrad Bäcker – It is possible that they won’t kill us and they might allow us to live*
September 27, 2019, to February 16, 2020
mumok – Museum moderner Kunst
Stiftung Ludwig Wien Museumsplatz 1
1070 Vienna