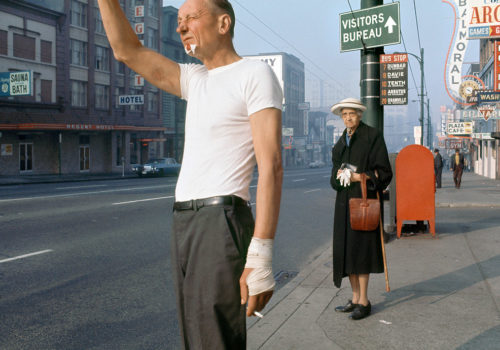 The German photography historian, critic and curator Hans-Michael Koetzle was the editor-in-chief of the magazine Leica World from 1996 to 2007. This year, to celebrate the centenary of Leica, he organized the exhibition Eyes Wide Open: 100 Years of Leica Photography at the Haus der Fotografie/Deichtorhallen in Hamburg, which runs through January 11th before travelling to Frankfurt, Berlin, Vienna and Munich. The exhibition catalogue, published by Kehrer, will soon be available in English.

Eyes Wide Open looks back at the history of Leica cameras since 1914 while showing that the photographs reflect the evolution of our perception of the world in the 20th century. Oskar Barnack, an optical engineer in Ernst Leitz’s factory in Wetzlar, Germany, created the prototype of the Leica , the “Liliputkamera” on the eve of the First World War. The camera’s  development was delayed by history, and  the first series of 25 units—the “Nullserie”—produced and tested in 1923. Finally, in 1925, the first camera, Leica Model A, was released. Its name went from “Leitz” to “Leca” before its makers settled on “Leica.” Fifty-eight thousand units were made and distributed throughout Europe, Japan and America.

The Leica was the first small format camera to use 35mm film. Weighing only 400 grams, it could fit in a jacket pocket and take 36 pictures per roll. It was discreet, silent. This  changed how photographers could work, and the kind of work they produced. In one of the first rooms of the exhibition, we see a short clip of Henri Cartier-Bresson, Leica in hand, moving swiftly and easily through the streets of New York in 1956.

Before the invention of the small-format camera, photographers used heavy and bulky view cameras which limited their mobility and response  as well as their choice of subject and framing. Photography had been suited for portraits and landscapes. The Leica was conceived during the First World War.But started being used in the late 20’s It was a contemporary of Bauhaus, the Spanish Civil War and early aviation.

In the early 20th century, the idea of speed took hold, triggered by technological developments. A double-page spread in the June 23rd, 1937 issue of the magazine VU on display at the exhibition features sports photographs taken by André Steinert with the caption “The Intoxication of Movement.” That intoxication continues to fascinate us today, no longer because of the shutter speed but rather for the immediacy with which photographs can be disseminated today. Another 1935 excerpt from VU presents a report from André Kertez shot in a wallpaper factory. It’s a lovely mise-en-abyme from this illustrated periodical that did so much to showcase French photography between the wars.

Eyes Wide Open gathers some 500 photographs by 150 photographers, along with newspapers, magazines, books, objects and films. Most of the prints were made by the artists themselves. Many come from the personal collection of Hans-Michael Koetzle, while others hail from galleries and other private collections (Sammlung F. C. Gundlach, Sammlung Skrein, Sammlung WestLicht).

Divided into fourteen thematic sections, the photographs on display are richly varied, from classic photographs of Alexander Rodchenko, Henri Cartier-Bresson, Robert Capa, Robert Frank, William Klein and René Burri to lesser known works, like Eva Kemlein’s 1946 photograph of Berlin in ruins, and Julia Baier’s 2014 series Geschwebe. The well-executed display and layout are complemented by the magnificent architure of this former Hamburg market hall. This exhibition deserves no less.