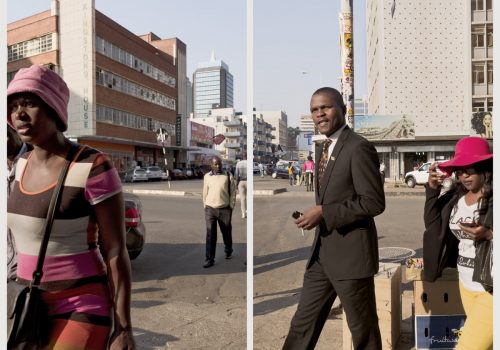 With his series “Museum of the revolution”, the photographer catches the rumor of the streets of the big African cities and makes amazing shows. A work crowned by the HCB prize in 2017 and to see in the new space of the Henri Cartier-Bresson Foundation in Paris.

Always like inveterate walkers, passers-by constantly move on the images of Guy Tililm as if they were on the lookout for something, in full quest. Thus, the streets of the big African cities seem to live where the photographer has installed his equipment. Abidjan, Harare, Dar es Salaam, Accra, Johannesburg, Maputo … This is a real panorama offered by Guy Tillim who went to each city several days to capture these scenes of the ordinary life of the streets of these cities. Africa. Above all, what is striking is the similarity between the cities. Everywhere, we find passers-by tied to their cell phones, who seem to be in a hurry, in the middle of the daily activity. Everywhere, there are street vendors on the sly trying by all means to grab  passer-by and sell them a trinket. Everywhere, gaudy advertisements on large panels make their slogan shine. Everywhere, it is the scene of a more or less controlled chaos where a confused disorder and a certain dignity reign, all in a warm and overflowing life atmosphere.

“I wanted to let the landscape speak, these places where decolonization happened not so long ago and of which we do not know very well what will happen,” says Guy Tillim, who claims to have been much influenced by Henri Cartier-Bresson and had also watched a lot of the work of his South African counterpart David Goldblatt. “Despite my visibility on the ground, I strive to become invisible and it works, people end up forgetting me,” he says again. Certainly, it allows him to capture something that is hard to grasp for the human eye. Especially since the photographer sometimes offers diptychs, triptychs, polyptychs; Successions of photographs taken roughly at the same place, but several minutes apart and which make an intriguing visual narrative where various people walk in the same scenery as actors on the boards of a theater. There is also the genius of Guy Tillim’s photographs. They perfectly reveal the space in which passers-by move. Thus, it documents the architecture of these African cities where  immense buildings dominate a disconcerting bric-a-brac. In Abidjan, a building in the shape of a pyramid, for example, which literally weigh down on the walker or in Maputo, funny houses in concrete that fall into ruin … A landscape made of odds and ends, composed over the years, that tells  the exciting palimpsest of these great African cities.