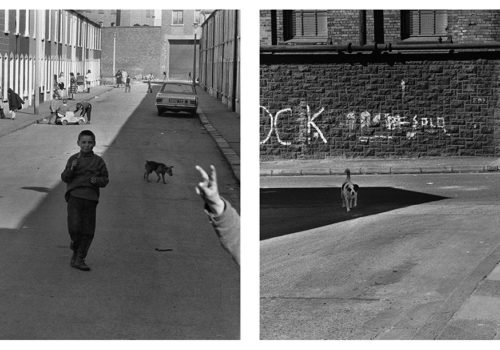 An Almanac – Text by Chris Klatell

I wasn’t initially eager to take on, with Gilles, what became the Annals of the North. But Gilles and his wife Alison Cornyn insisted that Whatever You Say, Say Nothing needed to be accompanied by some kind of guide or reader, and I was determined to do whatever it took to bring the overall project into the world.

The idea of a simple, linear supplement quickly became untenable. Whatever You Say, Say Nothing is structured around the helicoidal experience of time in a conflict that seems like it will never end, and we realized that the Annals would need to be a kind of almanac to it, like the volumes farmers check to see what to plant and what to do on any given day in the endless agricultural cycle.

Donald Glover has said that in the post-Internet era the job of the artist is not to make albums, but to create worlds. The Annals and Whatever You Say aim to create a world. We had no interest in telling readers what to think about the North – but we wanted to give them everything they needed to wander endlessly and to come to their own conclusions. Names, dates, places, stories, maps, documents, testimonies, pictures, facts, fictions, jokes, laws and songs – everything. A folly, of course, but an intentional one.

There are lots of games being played between Whatever You Say, Say Nothing and the Annals, some of which the reader may never notice and some we’re probably not aware of. Music and poetry loom large: The Annals loosely casts the photographer as Mad Sweeney from the medieval Irish epic and Seamus Heaney’s modern retelling, Sweeney Astray. In a chapter called The Book of Days and Hours, we reordered the events of the conflict into one never-ending, cyclical calendar year, and watched a sort of brutal, authorless poetry emerge on its own. We strongly encourage readers to have the Undertones or the Clash playing loudly in the background when they turn the pages.

Philip Gourevitch once told us that the Annals imagines all the books Gilles could have made, beyond the one that he had to make: Italo Calvino’s Invisible Cities if every city were Belfast or Derry. There’s probably some truth in that as well.

For me, the process of writing the Annals grew deeply personal. My wife’s from Derry, and I’d been travelling to the North since I was a very young man. The phrase, “whatever you say, say nothing” is no joke: No one ever said anything, or explained anything, in the North; language and geography themselves appeared designed to deny access or understanding to outsiders. The Annals became the process of better understanding the woman with whom I’ve spent my life, and the things she couldn’t or wouldn’t say.

My only hope for the Annals is that it gives readers, whether or not they’ve ever been to the North, the resources and opportunity to have the emotional reaction to Whatever You Say, Say Nothing that I had when I first saw it, and to experience every ounce of the Tolstoyian sweep, nuance and empathy that Gilles has layered into those volumes.