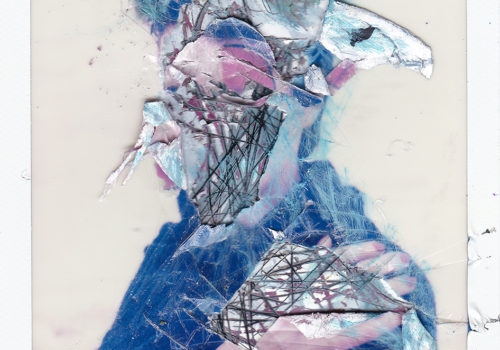 My past as a draftsman-painter has caught up with me for the last twenty years.

I see my photography slide steadily, and inexorably towards painting.

First in black and white Polaroid, in 2000, with a series produced in the daily life of an apartment and published by The (M) editions under the title of “Mes jours”.

Then in 2014 in “Interior Landscapes”, an ensemble designed over seven years on the coast of Cotentin( Normandy).

Water also appeared from this perspective: it represents a powerful element in the reinterpretation of the body, in a chosen context. The “Water Dance” series was the first to echo this in 2015-16.

More recently, in 2020-21, this return to Polaroid. The hand intervenes for the first time after the fact, deteriorating and transcending the images. Within the “Synesthetic Pola”, a pictorial epitaph that I address to the figure of the Toxic Princess.

Apparition, as fragile as the coming storm can be devastating.

The waves are complex, disturbing.

From the wound oozes an abyss that I recognize.

A bruised young woman arises in front of me.

The wound is acute,

the rhythm is deconstructed,

an invitation to rebuild?

These enlightened words are an illusory conversational game.

Screens of a sea of ​​absence.

A being in search of her own presence,

For  a recognition of her image in the disorder of her thinness,

to be seen by whoever wants to photograph her

Images that she accumulates to weigh her consistency,

her existence in the eyes of others.

She wears an adornment of blackness

looking for a part.

Her words: harmful, toxic, without empathy, without love,

are just the sad posture of the wanderings of a tattered life.

Her nights are open fields

to the gaping wounds of her days.

In her words from nothingness,

she declares herself Princess

and seizes the energies that approach her.

Her words are just a denial of the ongoing looting.

Vampire out of her den of emptiness.

Duplicity is her kingdom.

Her life, the lie she tells herself to try to exist.

The artfulness, her words.

My Synesthetic-Polaroid tell the meeting with Toxic Princess.

Images deteriorated, distorted, transcended in a confusion of senses and genres.

We won’t see her there,

since she did not exist.

Devastation as the only recourse in the face of the violence consented to, then suffered.

such were the instruments of revolt.

My palette of exorcism from this deadly relationship.

Begun in 2021, the Ethnic Pola series is a tribute to the body, which here does not just come down to an aesthetic dialogue. It is also an expression, a transgression of it which becomes a symbol of pride and power.

These bodies are to be read, admired, deciphered.

To transfigure these bodies, I studied the designs used by certain tribes which have now disappeared. Ethnic groups that have sometimes suffered genocides.

Their naked bodies are powerful and the visible traces they wear are akin to rituals and customs.

I take this idea and paint on the bodies, taking inspiration from these forgotten tribes.

With felt, khol or with glitter, the goal is to transcribe the strength, the independence of these women and their marked bodies.