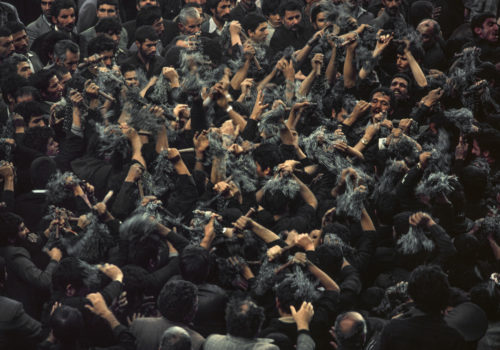 Iran. Rêves et Dérives.(Iran. Dreams and Drifts.) is the new book by Reza and Manoocher accompanied by texts by Rachel Deghati.

ONCE UPON AN ISLAMIC REVOLUTION

42 years ago, in Iran, on February 11, 1979, the mullahs seized power. In the violence of repression and lies, dreams of a more just society turned into nightmares for a betrayed people.

Since then, witnesses have continued to tell, to show the fate of a damaged society, of a people with a thousand-year-old culture, deprived of freedom and breath of air.

Since then, many have paid dearly for their resistance and their fight for the respect of human rights.

Poets have been silenced, journalists have seen their pens, their machines broken, human rights defenders have been gagged, citizens have been taken hostage by a theocracy.

Some are languishing in jails when others have been murdered.

Some have been forced into exile.

Some, weary, bowed their heads.

The Persian poets of a bygone era remain for women and men, from Rumi to Hafez, from Attar to Saadi.

42 years ago in Iran, black invaded cities and provinces, souls and hearts.

This is the story of two brothers, Reza and Manoocher, who grew up in Iran in the 1950s. Cradled in the values ​​which animate Persian culture, they open up to the world in a concern for freedom and justice. Adolescents attentive spectators to the concerns of their time, they were both already sensitive to photography. Manoocher studied cinema in Rome and Reza, imprisoned for 3 years under the Shah of Iran for cultural activism through the display of images denouncing poverty on the walls of Tehran, returned to his architectural studies.

WITNESSES TO A REVOLUTION

The Islamic Revolution, which agitated their country in 1978, diverted them from their primary vocation as filmmaker and architect and revealed them as photojournalists with the duty of witnessing. Reza and Manoocher covered the beginnings and years of the Revolution. Very quickly, the hostage-taking of the American embassy in Tehran forced newspapers around the world to rely on Iranian journalists among whom they emerged.

IN THE EYE OF CYCLONES

So began six years of visual testimonies for the major media. The two brothers collaborated with Times, Newsweek, Agence France Presse, Life and Paris Match magazines, Stern and many other publications. Their work gave a face to the people wounded by an Islamic Republic which did not keep the promise of a more just society. Witnessing the deadly events of the Iran-Iraq war, the abuses against the Kurds and Turkmens, the riots in Balochistan, and a society under ideological change, their photographs went around the world until their forced exile.

THE WORLD IS THEIR HOME

Both have become emeritus personalities in the world of photojournalism, each continues his journey of witnessing through images. Men of values ​​and actors of a free press, their reports bear witness to the upheavals of the world, between wars and peace.

Reza and Manoocher unveil their exclusive archives of an Iran frozen by the violence of the events.

Photographs by Reza and Manoocher