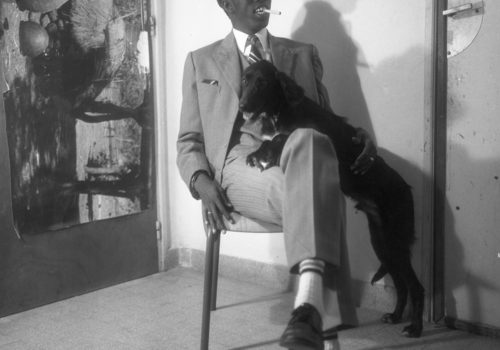 Crossed perspective on Saint-Louis of Senegal between the dean photographer Adama Sylla, born in 1934 and the young Eva Diallo, born in 1996.

Two generations, two photographic styles intersect here. Each of the authors used the pressing need to grab a device to record the twists and turns of the weather, the mood of the city that echoes their personal history. For both in the past and in the present, photography captured what was there, within sight: joyful young people posing for Mr. Sylla, the sandstorm that caresses the Senegal river for Eva … The work of images (to quote * Léa Bismuth) will have lasted half a century for the dean Adama Sylla and the adventure has only just begun for the young and talented Éva Diallo.

Adama Sylla was born on February 27, 1934 in Kolda, in Casamance. When the family moved to Saint-Louis of Senegal, he was still just an infant. He discovered photography at the Saint-Louis youth center. At the age of 20, he received a scholarship from UNESCO to do a versatile training course at the Musée de l’Homme in Paris. Back home, a year later, he joined the team at the CRDS (Senegal Research and Documentation Center) museum in Saint-Louis. He therefore photographed the visit of a president, the buildings, accompany researchers and ethnologists in the field to take pictures that he then processed in the museum’s laboratory. From then on the camera was for him, the ideal tool for documenting history and keeping traces of his city. “Conservation” is the credo of Mr. Sylla.edIn the early 1960s, he opened his photo studio in the fishermen’s quarter where he lived, in Guet Ndar. He worked there in the evenings and on public holidays after leaving the museum.

In this working-class neighborhood, people rushed to the studio to immortalize a new outfit, keep a memory of a family event, of a day with friends. Photography in the 60’s and up to 1990 was all the rage. Then the studios collapsed one after the other with the arrival of telephones with cameras. Mr. Sylla  also closed the studio.

These are some of the portraits of the inhabitants of Saint-Louis in Senegal which are on display today. Among them were other images taken recently by the young photographer Éva Diallo, originally from the river region thru her mother.

The photographer focuses on the documentary style to describe with allusive touches another reality of the territory: light, colors, trees, river water, or even everyday objects abandoned on the ground. Thus, by taking details of the country, she signs her passage. On her heels, her camera pointed at the ground registers traces, a dry palm branch, a plastic container, footprints in the sand, the shadow of an airplane flying high in the sky. The grain of her image is blurry, her focus is often on the background as if the presence of the object which was there under her eyes and towards which she directed her lens had, the time of the release, already passed away. She tirelessly repeats the exercise during her wanderings as if she were searching for the words of a poem. A poetry in soft and harsh colors where nature is thirsty, objects gave up the ghost and sand has enveloped the city.

Like so many little musical notes, these color images punctuate the black and white portrait sequences of Adam Sylla. There is no quaintness in these shots, unlike the studio portraits of the same period made, for example, by Malick Sidibé or Seydou Keita.

The camera for Adama Sylla, more than an artistic practice, was above all a tool. A tool for recording the world and its rituals, setting moments of grace, for posterity and memory.

Mr. Sylla is a unique man. A tireless defender of the photographic document, a unique man of his kind. These few photographs taken from his immense collection attest to his unwavering empathy for his fellow citizens and above all remain as rare testimonies of an era and of the history of Saint-Louis. This confrontation reveals a bit of how Adama and Éva each archived in their own way signs to unmask the ravages of time.