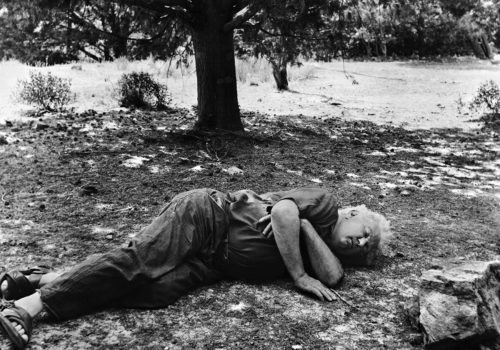 Agnès Varda often remarked that she had three lives, one as a photographer, one as a filmmaker and one as a visual artist. Galerie Nathalie Obadia devotes an exhibition in its Brussels space to part of this first lifetime – a nod to the origins of Agnès Varda, who was born in Ixelles in 1928.

Most of the photographs presented here are shown for the first time, since their discovery by Rosalie Varda, the artist’s daughter and curator of this exhibition, in the archives of the historic residence at 86, rue Daguerre in the XIVth arrondissement in Paris.

A catalogue entitled Calder, Richier, Schlegel, Székely par Agnès Varda including the accompanying text “EVER VARDA” by Hans Ulrich Obrist, who knew the artist for many years and who invited her to present her first installation, Patatutopia, at the Utopia Station during the 2003 Venice Biennale, published by Editions Sébastien Moreu on the occasion of this exhibition.

Agnès Varda’s photographic oeuvre is still relatively unknown, despite it being her first artistic activity. After obtaining a CAP [certificate of professional competence] in photography through evening classes, she began working for the Théâtre National Populaire, under the direction of Jean Vilar. In 1954, she presented her first exhibition in the courtyard of her home-studio on rue Daguerre, inviting her friends.

This exhibition presents both period prints made in Agnès Varda’s darkroom as well as posthumous silver prints. It reveals the great interest and friendship with which Agnès Varda photographed her artist friends: Alexander Calder (1898-1976), Germaine Richier (1902-1959), Valentine Schlegel (1925-2021) and the couple Vera and Pierre Székely (1919-1994 and 1923-2001). She photographed both the artists and their work.

“Varda told me that, for her, these studio visits were so much more than portraits. These four bodies of work demonstrate the deep dialogue and friendships she had early on with visual artists. They give an insight not only into the intimate space where work is created, and the fascination of following the process, but also into how the artists relate to their own work, their physical connection to it, even once it’s finished.” Hans Ulrich Obrist, 2021.

We find Valentine Schlegel, her lifelong friend, nicknamed “Linou”, kneading her clay in an almost cinematographic sequence of shots, or standing in her studio (which was located on rue Daguerre for a time). Agnès Varda has her posing amidst her bulbous ceramics, and captures her vases filled with foliage and flowers, sometimes cleverly arranged on a table like a still life from another era. The photographs echo the works; large period prints reveal the voluptuous curves of Valentine Schlegel’s sculptures, which evoke both bodies and moving vegetation.

Agnès Varda’s eye captures the face of Alexander Calder, handling his mobiles. She liked to photograph her American friend with his thunderous laughter, at the beach, where he poses humorously while waving his arms, or in the street, next to one of his works.

“He posed as the emperor of metallic bouquets. Having made, at his request, photographs of several of his mobiles, he came to collect the prints and offered, in that very thick, chuckling American accent of his, to pay me in barter. Let’s swap hours, he says, come to my storeroom and choose a mobile. Isn’t that nice? » Agnès Varda, Varda par Agnès, 1994.

On Agnès Varda’s contact sheets, we see Alexander Calder interacting with his Circus (1926-1931), concentrating on his acrobats suspended from wires in mid-performance, and the dozens of minute elements that make up this installation, which he continued to activate throughout his life.

“The way in which he touches them reminds us that Calder activated his kinetic works like living beings” Hans Ulrich Obrist, 2021.

In the early 1950s, Agnès Varda moved to rue Daguerre, where she found a thriving artistic community. She also came to visit Germaine Richier in her studio. The impact of her photographs is all the more poignant since the sculptor disappeared shortly after the photographs were taken, in 1959. We see Germaine Richier absorbed in her creative work, surrounded by her long sculptures with their tormented forms. Agnès Varda’s suggestions for poses can be sensed, we see the sculptor’s face appear behind a window or her hand covering the sculpture of a Cuttlefish.

The Hungarian artist couple Vera and Pierre Székely settled in Paris in 1946 and moved to Marcoussis in 1955. It is to this town in the Essonne that Agnès Varda, a friend of the couple, went to photograph the Székelys, as well as André Borderie and other artists. She humorously poses Pierre Székely at the same height as his organically shaped creations, and photographs him together with Véra discussing their work – of which it is sometimes difficult to distinguish who is the author. The prints reveal free-form sculptures that play on balance and proportion.

This exhibition of Agnès Varda presents previously unpublished photographs of the artists she had posing next to their works or whom she captured immersed in their creative work.

“She told me that if you keep your eyes open, everything is interesting, especially people.” Hans Ulrich Obrist, 2021.