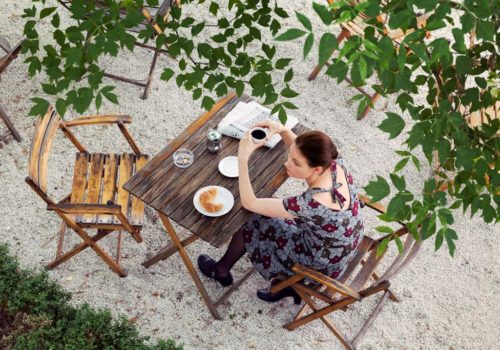 . Thomas Florschuetz
Blurred patterns of colors and shapes feature in the images of Thomas Florschuetz’ series Untitled (K52). These photographs show the view directly out of the artist’s frozen and slowly thawing studio window. In some pictures the ice forms a craquelure pattern on the glass, or the view outside through the window shimmers indistinctly through a fogged surface. Outside and inside condense atop the glass, like on a ground glass screen. Florschuetz uses the same detail of the window for all images in the series. Because the shots were taken within a relatively short period of time, small but distinct changes are visible, unfurling a visual spectrum that ranges from abstract surface and monochrome gradient to dimly adumbrated spatial contours.

. Lucinda Devlin
Lake Pictures is a series of photographs of Lake Huron, one of the Great Lakes surrounding the state of Michigan, taken at the same place, during different seasons, and at different times of day or night, exploring the changing atmospheric nature of the lake. These pictures are about water, sky, color, light, place, space and time. When we look at a large body of water, intellectually we know that there is more water beyond the horizon. If we suspend our intellects, our mind’s eye perceives the water as occupying infinite space.
The same concept is true regarding the sky. It appears limitless.
The way we can distinguish between the two is the fine demarcation line of the horizon that separates water from sky.
The thin line of the horizon defines the immensity of infinite space between these two boundless elements. The viewer is visually pulled into the photographs by the line where the two environments converge.

. Aino Kannisto
Making up stories about the scene and figure shown in Aino Kannisto’s pictures is easy, and almost unavoidable. Who is this woman? What kind of place is she depicted in? Interestingly enough, this open game with associations and fantasy takes its life from the very things that are not visible in the image. It is not only the endless web of thought strands these photographs inspire that captivates the viewer, but also their aesthetic, the composition of forms and colors.
Nothing is left to accident: the tones of the surrounding, clothing and everyday objects harmonize and the carefully chosen cropping generates balanced formal structures and relations between surfaces.
With the mesmerizing appeal of their intricate arrangements and subtle moods, Aino Kannisto’s photographs reveal not only the artist’s fine sense of pictorial composition but also her skill at creating sensitively felt moods. If we remember here that at the moment the shutter is released Kannisto is not standing behind the camera but rather posing in front of it, we can only conclude that her photos are an impressive demonstration of her mastery of the medium.