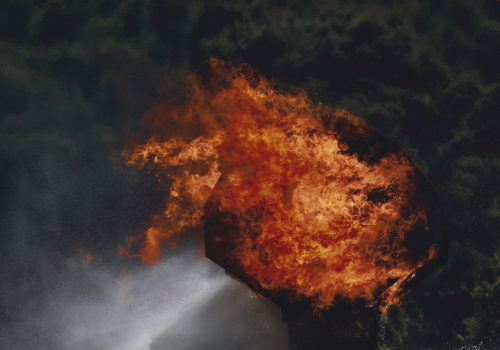 The second part of an artistic project on the fundamental elements started in 2018, “Feu” (Fire) is, like all of Francesca Piqueras‘s series, a primarily metaphorical work on the relationship between man and nature. After the stone and water of “Movimento”, the photographer now plunges us into the heart of a blaze, which is none other than that of the human soul. Nominated for the 2021 Pictet Prize, this new series is on display at Galerie de l’Europe in June and September 2021.

Francesca Piqueras has shown us over eight series the sublime agony of stranded cargo ships and abandoned maritime architectures, titans of steel and concrete devoured by rust, waves, and digested by the waves. Then, she showed us the wounds inflicted on the stone of the Carrara mountains, amputated from century after century to extract marble, and the subjugation of the waters of the Yellow River, which are imprisoned in the concrete of dams to appropriate its energy. With “Feu”, the photographer pushes her questioning on our relationship with nature further, by pointing her lens on an element whose domestication by our ancestors, a million years ago, indicates the origin of a destiny. breaking away from other species. Bronze Age, Iron Age, Industrial Revolution: the great turning points in human history are marked by the use of fire to forge objects and weapons, to build and to animate machines.

For this new series, Francesca Piqueras has adopted several points of view. She captured the mesmerizing, haunting and mysterious dance of the flames, with retina-burning images taken at a firefighter training camp where the fire of metal trees covered in gaslights is spouting out. She seized the orange glow of molten metal in steelworks where the raw material collected from discarded machines is melted down and turned into steel bars which, in turn, will be used in the manufacture of other objects and other machines. She has also been in contact with forest fires, offering us photographs that do not fail to evoke the “mega-fires” that ravaged California, the Amazon or Australia.

With this new series, Francesca Piqueras confronts us with the symbolism of fire which, according to mythology, was taken from the Gods by Prometheus to donate it to men. A gift that instilled in them reason and unreason, a thirst for knowledge and hybris, this intoxication of excess. Like a flashback, a million years after Homo erectus learned to strike flints to make sparks fly, the excess combustion gases that our activities release into the earth’s atmosphere threaten to ignite our planet.