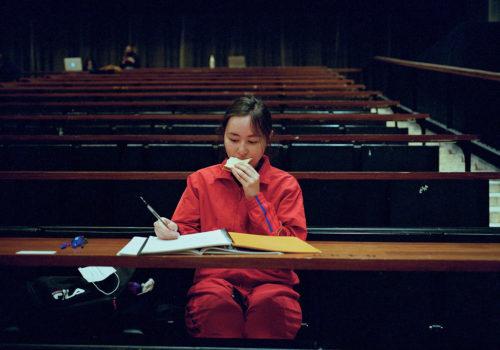 “In a way of containing talkative speech to keep only the compressed expressive charge. Thomas Klotz decided not to play with what he knows so well, not to be the reporter of crimes and misdemeanors, but to find aesthetics in the ethics of his subject: a “fair” photograph”. The words chosen by Michel Poivert to describe Justice, the latest series by Thomas Klotz, reflect the atmosphere that is built during this long journey through the French judicial landscape. His photographs, exhibited at the galerie Clémentine de la Féronnière, explore the places where justice is done: courts, of course, but also magistrates’ offices, ministerial offices, prisons, archives… These restrained images stand far from any sensationalism: here, the violence of stories and broken lives remains latent, underground, invisible. The composition, the power of the colors and the play on textures take precedence over the journalistic approach, so that the emotion first surfaces, before slowly emerging and imposing itself on the gaze.

By confirming the colorist palette that made the mark of his previous series, Northscape (2019), and Eve (2020), Thomas Klotz offers an all-encompassing and uncompromising look at justice, pointing out its paradoxes, its sometimes brutality, without ever sacrificing the aesthetic value of his photographs. The luminous serenity of places of power, laden with solemnity, coexists with the austere nudity of prison walls and the starkness of court corridors. The few portraits full of humanity, of a clerk, a lawyer or a law student, scattered in the middle of the cold purity of the bare spaces, give us a glimpse of the human presence diluted in the administrative machinery.

Thomas Klotz thus offers us a powerful, unexpected and confusing representation of the judicial system. Rather than documenting it, he chooses to immerse us in it and restore its atmosphere, to put us face to face with the raw reality of this environment little approached in photography.

It is accompanied by a book, published by Maison CF. It is already available for pre-order on the maisoncf.fr website. Preface by Michel Poivert and texts by justice professionals.