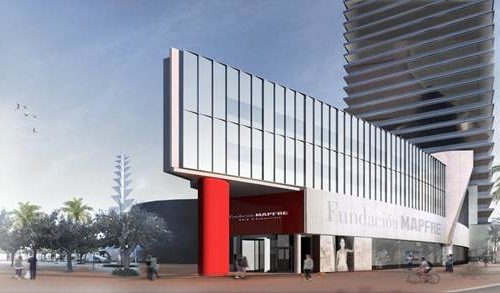 Faithful to one of our main goals to bring art and culture closer to society through our exhibitions, we have been conducting a vast program of traveling exhibitions for 10 years, based in particular on the photographic program that dates back to 2009.

This program has been interested from the beginning in the great masters of photography and contemporary authors who, although halfway through their career, have already reached what could be called a first maturity, and with it a international renown early and undisputed, but which, until now, have not been the subject of any major exhibition, neither in Madrid, nor in Barcelona.

In order to generate greater impact abroad, we are working so that all our projects can travel to other cities after being presented in our showroom in Madrid, and in Barcelona since 2016. Some projects have met a great success thereafter, whenever the conditions of conservation of the copies and the loans allowed it.

As such, over the years, we have created a network of institutional collaborations in our country and abroad with several centers such as the SFMOMA of San Francisco, the museum Huis Marseille of Amsterdam, the Jeu de Paume of Paris, the Fotomuseum in Rotterdam, the George Eastmann House in Rochester, the C / O Berlin in Berlin and the Rekalde Hall in Bilbao, among many others.

In addition, we had the opportunity to present in Brazil, Colombia and Mexico the works of several artists: Brassaï, Walker Evans, Emmet Gowin, Gotthard Schuh Fazal Sheikh or Dayanita Singh.

Thanks to this presence abroad, we are pleased to announce the holding in the Netherlands during this autumn of three exhibitions produced by Fundación MAPFRE between 2018 and 2019. This is Berenice Abbott at the Huis Marseille Museum. Amsterdam (September 7 to December 1), Brassaï at FOAM in the same city (September 13 to December 4) and Richard Learoyd at the Fotomuseum in The Hague (October 5, 2019 to January 5, 2020).

As far as our collection of photographs is concerned, its origins go back to 2007. Since then, our acquisitions and exhibitions have made it possible to discover contents with a closely related evolution in order to constitute an important project allowing to send to the company our proposal on the meaning and importance of the photographic image as language, window and dialogue between man and the contemporary world.

The starting point of the collection was the acquisition of Nicholas Nixon’s famous series, The Brown Sisters, arguably one of the most important reflections of contemporary art on the passage of time. This purchase, followed by other important acquisitions such as the works by Graciela Iturbide, Paul Strand or recently by Paz Errázuriz, show in their own way how we want to evolve the collection which aims to gather, wherever possible, a set of photographs to better understand the work of each photographer. In these specific cases, the visitor has a complete overview of the work of these artists through the collection.

The collection currently has more than 1,200 works and is continuously enriched by acquisitions and commissions to artists already present in our exhibitions and we invite them to work in Spain. Jitka Hanzlová came to work in Madrid in 2012, Emmet Gowin did it the following year in Granada, Vanessa Winship in the province of Almeria in 2014, Richard Learoyd went to Lanzarote last year with his dark room, Eamonn Doyle has just completed a project in Extremadura and Tomoko Yoneda is already preparing a new project for next summer.

On some occasions, the collection has also made it possible to develop projects hosted by other institutions. Indeed, the Iturbide collection – which includes a total of 184 works – was presented in 2018 to the Barrié de la Maza Foundation of La Coruña (Galicia, Spain), as well as part of this collection in 2019 during Fotografie Frankfurt Forum Frankfurt; Paz Errázuriz – with 180- at the Museum of Fine Arts in Santiago de Chile or the exhibition “Retratos”, with commissioner Carlos Gollonet, chief curator of photography Fundación MAPFRE, which offers a glimpse of the history of photography by taking the portrait as a red thread, one of the most vigorous genres of the fine arts, and an essential discipline of photography since its origins, a project that was presented in 2015 by the Museum of Mexico City in the part of the FotoMex Festival’s programming.

Fundación MAPFRE will inaugurate in May 2020 a new art center devoted mainly to photography. On the one hand, this project is a continuation of the line of exhibitions conducted so far, with retrospectives of the great masters of photography of the twentieth century and full panoramas of contemporary writers with international renown early and indisputable.

On the other hand, it will promote unprecedented initiatives in the photographic activity of the foundation such as, among others, the inclusion in the program of exhibitions of Catalan collections and photographic collections from the public and private sectors, the creation of an educational program for schools and families, the scheduling of conferences or the awarding of prizes.

This new space, which will replace the current headquarters, will be installed in the famous building called “Edificio Vela”, at the foot of one of the most representative towers of contemporary Barcelona: the MAPFRE Tower.

This new headquarters will have a total area of ​​1400 m2 spread over 2 floors, with two exhibition rooms and spaces reserved for other uses (bookstore, educational activities and an auditorium).