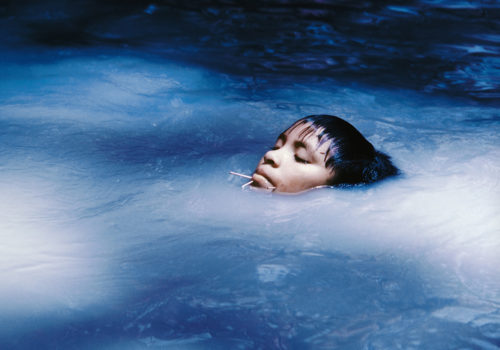 Claudia Andujar (1931, Neuchâtel, Switzerland) grew up in Oradea, in Transylvania, a village that was then part of Romania, after being occupied by the Austro-Hungarian Empire. The advance of Russian troops in the region during World War II forced Andujar to flee with her mother to Switzerland. She could do nothing to protect her father and her paternal family, of Jewish ancestry. They were soon taken to the concentration camps of Auschwitz and Dachau, and murdered. A Holocaust survivor, Andujar emigrated to the United States and in 1955 to Brazil, where she began a career in photojournalism.

The trauma of her childhood never left her, and she spent much of her adult life trying to build new roots and evade the sense of guilt for not being able to help. Her perplexity against such injustice eventually evolved into a strong commitment to vulnerable and marginalized groups of people. As if trying to understand the humanity of others could help her understand the violence of her European past. “Photography is a process of discovering the other and, through the other, oneself.”

It was only in 1971, at the age of 40, that Andujar met the Yanomami, an encounter that would transform her life. Fascinated by a society that had little influence from non-indigenous world, Andujar left her career as a photojournalist to enter the Amazon in a project of self-discovery. With the help of a missionary friend, she became involved with the Yanomami people of the Catrimani River region in the state of Roraima. Her initial curiosity unfolded into a genuine commitment to establish bonds and expand her understanding. She was a foreigner and a friend. The photograph we see above was taken during a reahu ceremony, some years after Andujar´s first trip to the region. The reahu ceremony are funerary and intercommunal rituals that command Yanomami life. It is during these long ceremonies, usually preceded by good hunting and harvesting, that the Yanomami shamans organize their social life, renovate their relations with neighboring communities and honor their deads so that they can ascend to the back of the sky and rest. Each reahu is composed of several specific ceremonies and can last for many days. It is during these ceremonies that the shamans inhale the powder yãkoana, feeding their spiritual xapiri in search of orientation and guidance. In this photo, the residents of the Yanomami Xaxanapi village enter the communal house of the Korihana thëri with their best outfits for the introductory dance of the guests. To photograph a reahu, Andujar had studied and prepared herself intensively, practicing photographic techniques that would allow her to photograph in the   dark, under uncontrolled condition, and express what she felt and learned. By combining flash with long exposure, Andujar was able to freeze the night shot and at the same time create streaks of light on the communal house’s sky. Some time later, she also re-photographed the image using a color filter to enhance the spectral, transcendent experience of the scene. We can feel the rhythm and almost see sound, chants and the xapiri moving through the air, swirling brilliantly in their mirrors of light. Andujar was not interested in abiding to the rules of journalistic or ethnographic photography. She was searching for a way to give a photographic form to cultural experience that was abstract and invisible, that had no photographic representation, based only on what she learned and felt. She was later criticized by die-hard anthropologists for aestheticizing the shamanistic experience, but the freedom with which she photographed these ceremonies testify to the intimacy she had developed with this Yanomami community.

The following years gave rise to a different scenario. In 1973, as part of a big development project in Amazonia conducted by the Brazilian military dictatorship, road constructions and mass migration of workers crossed the then isolated Catrimani region, bringing in a wave of epidemics and social disruption. Faced with the violence that broke free of notice in the middle of the forest, Andujar and other friends put aside their projects and embarked on direct protest against the military to defend Yanomami rights and land. The years saw a collaborative fight take shape with many indigenous and non-indigenous people to help. Andujar move away from the artistic milieu to embrace direct activism, organizing demonstrations, protests, and vaccination campaigns to try to stop the violence. Her photographs were used only to produce the necessary images to inform outside audience of the situation and the struggle – they were images of a very different nature. It was during this period that she became friends with the leader Davi Kopenawa, with whom she fought a 14-years battle for the continuous demarcation of the indigenous land. Their victory is now being challenged by the current Brazilian government. Throughout those years, Andujar comprehension of photography and of her role shifted constantly, moving from her own artistic project trying to materialize another culture’s cosmovision to using images as an instrumental tool for defending the rights of the Yanomami, the people that she now considers her family. The political dimension of her work was present since the very beginning, when she attempted to expand what we could see and understand, to the use of her archive as a tool to defend and protect, something she has been developing for the past 40 years. The only guide for this journey was a strong ethical commitment, her respect for humanity and diversity, and her determination to not allow the past to repeat itself.

Thyago Nogueira is the curator of the exhibition and the Head of the Contemporary Photography Department at the Instituto Moreira Salles, Brazil