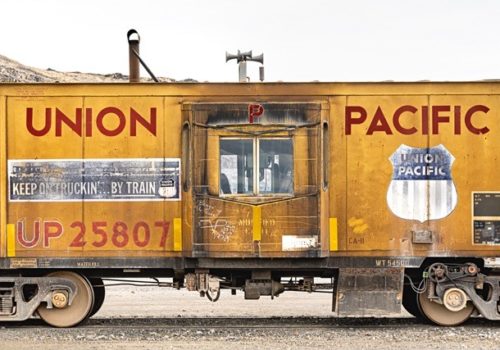 Front Room Gallery presents, “Passing West” a solo exhibition of photographs by Stephen Mallon. “Passing West” is a continuation of Mallon’s “Passing Freight” series, a visual celebration of the unique beauty and function of freight train cars in United States. This series of photographs captures the still active rail lines that carry freight to destinations across the country. Mallon’s industrial landscape photographs isolate freight cars within this iconic transportation system, which has played a critical role in supply infrastructure across the continent for hundreds of years. The photos in “Passing West” are framed against the open plains, mountain ranges, and the salt flats— mostly taken during a residency at the Montello Foundation in 2020, in which Mallon travelled the countryside of Utah and Nevada.

Poised against the rugged western landscape Mallon’s photographs of train cars often appear to carry the weight of the mountains themselves. Whether they are covered in graffitti or smartly displaying the rail lines iconic logos, each of these cars are brimming with it’s own individual personality. In one “Hopper” car, the tan car stands in front of the dusty desert mountains, and on it graffitti states “confront my toxic masculinty”. Another car, a yellow caboose with the crimson “Union Pacific” logo on it, would be as comfortable in an episode of “Thomas the Tank Engine” as on the set of “East of Eden”. Some of the open Box cars actually frame the mountains and flats themselves with their rectilinear shapes.

These trains are all moving, quite literally. And while they might appear to be stopped in the photograph, it is only for that split second as they pass Stephen Mallon, his camera, and his tripod. Mallon’s procedure involves many elements including the perfect location, light, the individual personality of each car, the trickiness of getting exactly the right moment, and patience. The intersection of mechanical and natural worlds, singular encounters where the trains activate the landscape are hard to predict.

Stephen Mallon is well know for his series “Next Stop Atlantic,” featuring decommissioned NYC Subway cars as they are retired in the depths of the Atlantic Ocean as artificial reefs, as well as his series “Brace for Impact”, which chronicles the reclamation of the plane which was successfully landed in the waters of the Hudson river by Captain “Sully” Sullenburger.

Mallon’s work has been exhibited in museums and galleries internationally, and his work has been written about in many publications, including National Geographic, The New Yorker, New York Times, Vanity Fair, Wired, Stern, PetaPixel, Viral Forest, BuzzFeed, New York Magazine, The Huffington Post, and featured on CNN, CBS, MSNBC and NPR.