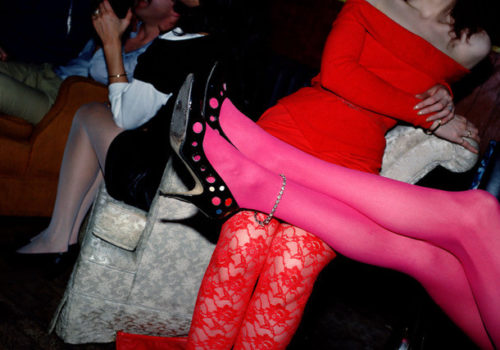 A regular club goer in the 1970s and 80s, Frank Rispoli documented the irreverent Punk Rock and New Wave club scenes in downtown NYC by creating metaphorical portraits of women via their shoes. Distilling the frenzied nighttime energy of NYC’s dancehalls and sidewalks into frozen moments, Rispoli offers the viewer only a segment of the body; colorful and graphical compositions highlight the curve of the leg, ankle, and foot adorned with the threatening and thrilling pedestal of the high heel. “His photos are intoxicating Kodachrome timestamps that capture the frenetic zeitgeist of the late 70s and early 80s, leaving the identity of the women up for interpretation,” states Hannah Ongley in I-D magazine.

Recognizing the inherent performance of sexuality and desire in both fashion and club culture, Rispoli documented the intertwining of the two. Always with a camera strapped around his neck, he frequented Danceteria, Tier 3, Max’s Kansas City, Studio 54 and many other clubs in Soho, Chelsea, the Lower East Side, and Midtown. Rispoli asked female clubgoers, bar patrons, singers, and band members if he could photograph their shoes, utilizing the staged sets, props, and bathrooms of the clubs, and the taxis, sidewalks, and rooftops of the city, as his backdrops. With a keen eye, Rispoli responds when the color palette and patterns found in fashion echo those found in the environment and when the rich textures of fabrics are palpable. As the women project their personality and attitude in front of the camera, Rispoli becomes a collaborator in documenting the “the sexually charged identity performance of late-70s New Wave NYC” (Ongley) as it played out on the stages of night and street life.

Rispoli attributes his interest in women’s shoes to his inability, as a teenager, to look women in the eye and, due to his shyness, focusing on their shoes instead. As an art and design student in high school and college, Rispoli was further inspired by fashion photographers Guy Bourdin and Helmut Newton.