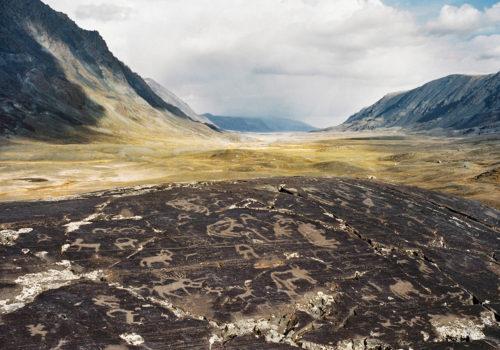 I in no way wish to add a stone to a hypothetical theory of human nature; I only aspire to propose a more effective and less ethnocentric way to account for what is ordinarily called cultural diversity.

Faults, between places and non-places is based on a theory formulated by several archaeologists and anthropologists according to which, more than 20,000 years ago, during the last ice age, peoples coming from Asia would have crossed Beringia (current Bering Strait) to reach North America. Some groups will settle on the lands to the north, while others will continue their migration to the South of America.

This project combines photographs, video scenes and various documents (maps, drawings, texts), in which, starting from the notions of nomadic locality and globalized non-place, I try to explore in several regions of the planet the relations and tensions between vernacular cultures (in particular those of nomadic populations, globally threatened today) and the industrial world during the Anthropocene period.

As my previous works show, my approach to photography is marked by anthropology. If in La Petite Mer des oubliés (1996-2006; Le Bec en l’air, 2006) and in De gré ou de force – Noailles à l’heure de la réhabilitation (Les p’tits papiers, 2007), I had attempted to document the evolution of micro-societies on a local or territorial scale (those, diverse and complex, which were formed around the Etang de Berre and its multiple industrial activities in the first case; and in the second, that just as complex and varied in the Noailles district in downtown Marseille); in recent years I have worked on a larger scale, focusing on the diversity of cultures and the movement of populations in the Mediterranean Basin in Ulysse ou les constellations (2003-2013; Le Bec en l’air, 2013) and to the treatment of waste in this same space in Vies d’ordures (collective exhibition, Mucem, Marseille, 2017).

Failles, entre lieux et non-lieux, l the project that is the subject of this dossier is part of these concerns.

The complete text can be found in the French version of The Eye of Photography.