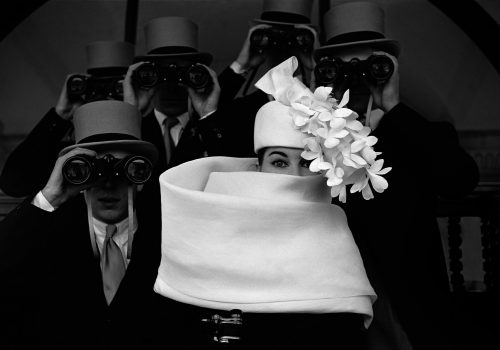 One of the last giants of French photography just disappeared.

We devoted a whole day to him in 2013: here it is, with a great video by Philippe Abergel made a few months ago.

You will find in our archives ten other subjects or so on Frank Horvat, this extraordinary photographer!

Born in 1928 in Italy to parents who were doctors, Jews and from Central Europe, Frank Horvat lived successively in Switzerland, Italy, Pakistan, India, England and France, where he settled at the end of the 1950s. , while traveling regularly to the United States and traveling frequently to Europe, the Americas and Asia.

His career as a photographer was influenced, in 1950, by an encounter with Henri Cartier-Bresson, which determined him to adopt the Leica and undertake a two-year trip to India, as an independent photojournalist. The black and white images he produced there earned him his first successes – notably his participation in the exhibition “The Family of Man” at the Museum of Modern Art in New York.

From 1957, he applied his experience as a reporter to fashion photography, with a more realistic and less staid style than that of the magazines of the time. His publications in ELLE, Vogue and Harper’s Bazaar, in Europe as in the United States, had a lasting influence on the genre – while attracting the wrath of Cartier-Bresson, for whom his mixture of directivity and non-directivity was “pastiche” .

The years between 1965 and 1975 were a time of crisis for current affairs magazines and their photographers. Horvat attempted experiments in illustration, film and video, which are often unfinished. From 1976, he found his “way out of the desert”, with three photographic essays undertaken without commission (“for once, I was my own client”) and intended for exhibitions and books. Portraits of trees, Vraies Semblances and New York are three almost simultaneous projects, both divergent and complementary. Horvat considers them as “his triptych”. Compared to “Cartier-Bressonian” orthodoxy, however, they represent a further transgression – since all three are in color.

The 1990s led him to an even more radical breakthrough, through the use of the computer and the manipulations it allows. In The Bestiary and The Metamorphoses of Ovid, Horvat explores a territory between photography and painting – a research which arouses as many objections as acclamations, and which he himself subsequently abandons, to limit himself to interventions more subtle, which only the computer allows, but which remain in the register of the “decisive moment”. Either way, these experiments are ahead of their time and as innovative as the use of reporting techniques for fashion had been.

In 1996, Horvat, once again changing the subject, applied the possibilities of digital technology to documentation on Romanesque sculpture, published in 2000 with a text by historian Michel Pastoureau.

His next two projects, 1999 (the year’s photographic journal) and La Véronique (the 30 meters perimeter around his house in Provence), are considered by Horvat to be his more personal contributions to photography. The first gets a fairly wide impact, the second remains relatively confidential. In both, Horvat explored the mysteries and wonders of everyday life, the opposite of the tendency, widely diffused among photographers, to emphasize the superlative and the exceptional. These are mature works, characterized by technical mastery that managed to be forgotten and by a wealth of references and associations of ideas.

Until the last day, Frank Horvat, camera in his pocket, continued to document his daily life and, through the publication of his White Papers, brought together the different periods of his photographic life.

At the same time, he was preparing the re-edition of the reference work Entre Vues, ​​enriching it with new interviews. Thanks to his personal collection, which began over 40 years ago, Frank Horvat offers us, through nearly 500 prints, a skilful selection of what he considers to be the best works from a large selection of renowned photographers. This unique collection will be the subject of an exhibition at MAMM, Moscow.

His latest work, on his series in New York in the 1980s, Side Walk, published by Atelier EXB – Xavier Barral, will be published in October 2020. His series Vraies Semblances has just been the subject of an exhibition at the Lelong gallery, Paris. And his gaze as a young photographer, just arrived in Paris, is currently exhibited at the Maison de la Photographie Robert Doisneau.

Frank Horvat passed away, surrounded by his loved ones on October 21, 2020.