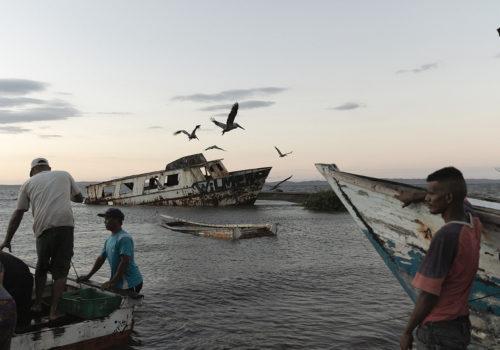 The 12th edition of the Carmignac Photojournalism Award is dedicated to Venezuela and its hardships at the individual, social and ecological levels. Chaired by Quentin Bajac, Director of the Jeu de Paume, the jury met in November 2021 and awarded Fabiola Ferrero.

The exhibition Venezuela, The Wells Run Dry by Fabiola Ferrero, laureate of the 12th Carmignac Photojournalism Award, explores the disappearance of the Venezuelan middle class. A prosperous democracy in the 1960s and 1970s, the country is struggling to extricate itself from a deep economic crisis, marked by the plummeting price of oil, endemic corruption and hyperinflation. Seven consecutive years of economic collapse and political crisis have widened the inequality gap and destroyed the middle class. The Venezuelan photographer set out to document years of wealth that now exist only in memory. She travelled to places that were once symbols of prosperity, looking for the remnants of a vanished economic success story. Her reportage took her across the country, photographing the dis- appearing oil and salt industries and the communities that depend on them, the looted and abandoned universities, and the last traces left behind by Venezuelans who decided to leave the country for a better future. Combining archival images, videos and photographs, Ferrero creates a visual capsule that documents the economic downturn in her country and the consequences for its people. She compares her project to trying to photograph a lake before it becomes a desert. “If there is a time to document and leave a trace of the memory of who we were, it is now.”

“Over 6 million Venezuelans have left my country. My parents. My brothers. My closest friends. Myself. One by one, we all left. I saw my country become a different one, and my memories blur, as if looking at my childhood through a foggy window.

So, I went back in 2022, two years after migrating, and when I found myself in the middle of the decay, I sought refuge in memories–of others and my own. This is my attempt to look for the remains of the prosperous oil nation I grew up in. To dig into the memories of a time that existed before collapse.

A decade ago, right before Hugo Chávez’s death, Venezuela was still in a window of opportunity, with the majority of its population being working age, the oil barrel costing over 100$ and foreign investment flooding. Two years later, oil prices dropped, political violence took over and waves of young migrants, mostly between 15 and 34, started to cross borders to other countries. A collective escape that hasn’t yet ended.

Venezuela’s population decreased by almost a fifth since 2014, according to the UNHCR. Migrants set out to Colombia, Perú, the United States, Spain, Portugal, Italy, Argentina, Ecuador, and the rest of the world. I personally landed in the dense city of Bogotá, a place that over 500,000 Venezuelans call home.

Venezuela also grew older and poorer. Seven consecutive years of economic collapse and political crisis left a devastation only comparable to countries that went through an armed conflict: 94% of the Venezuelan population now live below the poverty line, almost destroying the middle class and increasing the inequality gap. Once a major energy exporter, my country now depends mostly on imports and remittances.

It is in grieving our normality that all Venezuelans find a point of connection. But memory is not necessarily exact, and this rec- ollection of voices includes, in some cases, the flawed view of the past as the only safe place and our known normality as a healthy one. Looking closely, however, we can also find in that same past the answers to the contradictory and multi layered Venezuela we see today. The illusion we built on oil seems to vanish rapidly, and it feels as if I’m trying to photograph a lake before it becomes a desert.”

Exhibition
This year, Fabiola Ferrero’s reportage will be the subject of a double exhibition, part of PhotoSaintGermain festival. An indoor exhibition at the Réfectoire des Cordeliers, designed by the scenographer Alice de Bortoli and her collective, Ortiche, will combine photographs, archives, texts and 360° videos. A second exhibition will be held on the Port de Solférino, opposite the Musée d’Orsay, in partnership with the City of Paris.

The Venezuelan photographer set out to document years of wealth that now exist only in memory. She went to places that were once symbols of prosperity, to look for the vestiges of a bygone economic success. Her reportage took her across the country, photographing the oil and salt industries on the verge of disappearing and the communities that depend on them, the universities looted and abandoned, and the last traces left by the Venezuelans who decided to leave the country for a better future. Fabiola Ferrero creates a visual vignette that documents the eco- nomic tipping point of her country, and the consequences for its people.

Echoing this exhibition, in a desire to give a voice to those who make and think about photography and photojournalism today, the Fondation Carmignac and PhotoSaintGermain are also offering an associated program of talks and screen- ings, bringing together photographers, curators, photo editors, collectives, and researchers, turning the space into an effervescent hub of exchange.

Fabiola Ferrero is a journalist and photographer born in Caracas in 1991 and cur- rently based in Colombia. Her personal work is the result of how her childhood memories contrast with nowadays Venezuela, her home country. Using her background in writing and investigative journalism, which she studied in Caracas (UCAB), she develops long term visual projects about South America, and espe- cially Venezuela’s crisis. Her educational background in photography includes the Joop Swart Masterclass 2019 and the Eddie Adams Workshop.

She was a jury member for the World Press Photo 2022 contest South American region and Magnum Foundation Fellow for the Social Justice Program in 2018. Interested in bringing opportunities to other newcomer photographers in the region, Fabiola founded Semillero Migrante, a photography mentorship program around migration. Among her recognitions are the Inge Morath Award, 6Mois Photojournalism Award and the Getty Images Editorial Grant. She was also a finalist for the Alexia Grant, Eugene Smith Memorial Fund and the Leica Oskar Barnack Newcomer Award. As well as developing independent investigations in South America, her work has been featured in TIME, The New York Times, National Geographic, M Magazine, Le Monde, and others. She is the 12th Carmignac Photojournalism Award laureate.

Monograph
The exhibition is accompanied by a bilingual French-English catalogue, Venezuela, The Wells Run Dry, with photographs and texts by Fabiola Ferrero and Milagros Soccoro, Venezuelan journalist and writer.
Co-published by Fondation Carmignac and Reliefs Editions, it will be released on October 27, 2022
Format : 21 × 28 cm, 160 pages
Price: 35 €