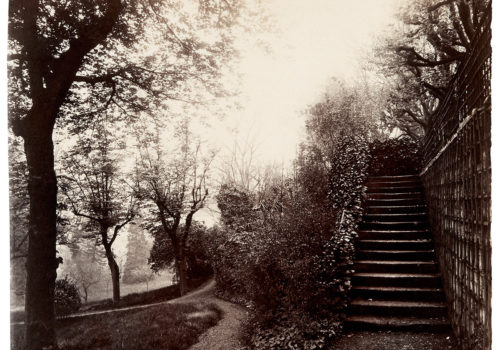 Henri Cartier-Bresson, Eugène Atget, Marc Riboud, Laurence Sackman, the Museum of Decorative Arts; The photographic summer is going to be sumptuous in Paris! Stay in Paris in July and August: Paris will be yours. Still empty but open unlike the last 18 months in a cell! And after Henri’s, visit Atget’s exhibition; both are sublime! – Jean-Jacques Naudet

About two generations separate the two photographers. The first, Eugène Atget, gave up his career as an actor, the second, Henri Cartier-Bresson, that of painter, in favor of a relatively new art, photographic recording. In an exceptional double exhibition and new approaches, the Fondation HCB (from November 17, 2020 to February 21, 2021) and the Carnavalet – Histoire de Paris museum (in spring 2021), join forces to show, from their collections, the essence of the capital in the work of these two great figures of French photography.

Henri Cartier-Bresson, captivated by Eugène Atget’s approach, imitated him until he discovered the Leica and ” the decisive moment “. “ to scarper ” after having recorded what he saw, as Cartier-Bresson often said, remains his favorite provocation while for Atget, at dawn, his heavy load on his back, the recording is very thoughtful; we guess there are few chances but a pleasure of the vision that asserts itself over time.

Atget, is more interested in the city, from the most classic architecture to the most remote courtyards, obsessively imaged a Paris marked by history, offering his prints to painters or libraries. The characters who invite themselves into the frame blend into the background. Henri Cartier-Bresson, after having frequented the surrealists in the 1920s, discovered himself as a long-haul traveler, with Paris as his home port. More than the city, it is the man who interests him, he catches him in the street or on the occasion of meetings. His camera always with him, photographing is a breath, an affirmation, sometimes a protest, a stroll sometimes guided by a reportage.

Atget has said little or nothing about his work. Reported remarks have served to define an essentially documentary project, but his direct and poetic approach fascinated many of his contemporaries, hence the most contradictory comments on this atypical work.

Cartier-Bresson, of which the Carnavalet Museum has a fine collection, has commented a lot on his work and especially in opposition to what we wanted him to say. The result is another complexity, confirmed by the examination of his archives kept within his foundation.

Photographers, Atget and Cartier-Bresson were also avid readers. These two fundamentally independent figures, somewhat austere, have cultivated neither intellectual concepts nor artistic principles to be based on the value of experience. They invite us to exercise our gaze, to consider the complexity of this world as the very source of our imaginary faculty. History has wanted these two works, emancipating from photography, to be first recognized in the United States, before each leaving an immense posterity. The two commissioners wanted this original selection to reflect the poetic dimension of the two authors.

On the occasion of the reopening of the Carnavalet museum and of the second anniversary of the arrival in the Marais of the HCB Foundation, it is a celebration of Paris through singular looks, before it becomes one of the most important cities. most photographed in the world.

CURATOR OF THE TWO EXHIBITIONS

From the collections of the Musée Carnavalet – Histoire de Paris, the exhibition presented at the Fondation HCB is the result of a long research effort undertaken jointly by the two institutions. The result is an exceptional exhibition around the work of Eugène Atget (1857-1927), an atypical figure and pioneer of photography. Above all a craftsman, whose prolific production of images is intended for artists and amateurs of old Paris, it is posthumously that Eugène Atget rose to prominence. Critics and photographers perceive in his images of Paris the forerunner of modernity. Among them, Henri Cartier-Bresson, who seeks to imitate him in his first images. Thus, the place of Paris in the work of Cartier-Bresson is the subject of an exhibition at the Carnavalet Museum in  2021, a project designed with the HCB Foundation.

First recognized in the United States and by French surrealist circles, acclaimed by generations of photographers who have succeeded him, Eugène Atget still exerts an unprecedented influence in the 21st century, even if the outlook on his work is still sometimes mixed. The photographer, loaded with a camera and glass plates, often captures his images at dawn and worked to collect old Paris for about thirty years. He also explored the edge of the city, known as “the zone”. His images of almost deserted streets, storefronts and courtyards today bear witness to the urban changes made at the turn of the 20th century

Beyond their documentary character, Eugène Atget’s images testify to a deep aesthetic sensitivity, characterizing the invaluable contribution of the photographer to the medium. As Paris changed, Eugène Atget’s way of working  also evolved to become more and more sensitive to light and atmospheric effects. His cult of detail (based on modest subjects), contrary to the triumphant pictorialism of the time, is also singularly modern and lets this notion of pleasure, rarely mentioned in connection with Atget, surface. The exhibition and the accompanying book offer this shared pleasure.

Eugène Atget was born in 1857 in Libourne. Giving up a career as an actor, he began to photograph in 1888. Self-taught, he produced documents for artists as early as 1890 – images of plants, landscapes and various objects. In 1897, he began systematically photographing old Paris, attentive to scenes of urban life, architectural details as well as the topography of the capital. At the end of his life, he met Man Ray’s assistant, Berenice Abbott, who took two portraits of him. Eugène Atget died in 1927 in Paris. Berenice Abbott learned of his death as she prepared to give him these two portraits. With the gallery owner Julien Levy and the legatee of Atget, André Calmettes, she allowed the rescue of Eugène Atget’s studio funds, the recognition of his work by the publication of various works and then the entry of the Abbott / Levy collection. in the collections of the Museum of Modern Art in New York in 1968.