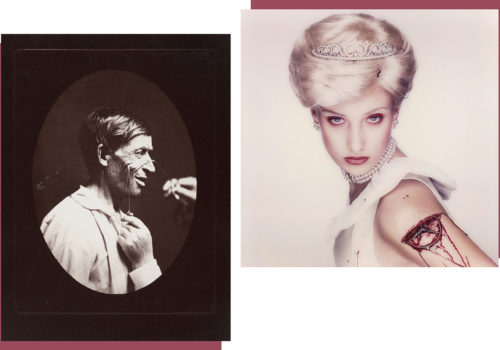 This is the eleventh dialogue of the Ettore Molinario Collection. A dialogue on the truth of emotions and their scientific representation. A dialogue between distant protagonists, whom fate wanted to bring together in the same place. And imagining the meeting between Duchenne de Boulogne and Lady Diana in the Pitié-Salpêtrière hospital in Paris, I invite you to follow our next appointments.
Ettore Molinario

It’s one of those dates in everyone’s history now, and it’s a recurring question, «do you remember the day Lady D died? And where were you?» On August the 31st 1997, Princess Diana passed away in Paris, at the Pitié-Salpêtrière, in that same hospital where a century and a half earlier Guillaume-Benjamin-Amand Duchenne de Boulogne, a French neurologist, had carried out his extraordinary research on the conductivity of neurotransmitters and on the neurophysiology of emotions. Research that the doctor had also documented at a photographic level and that in 1862 he had collected in the famous volume Mécanisme de la physionomie humaine, inaugurating the relationship between photography and medicine. Together with Adrien Tournachon, Nadar’s younger brother, and then independently, Duchenne had documented the different reactions of the facial muscles to the stimulation of electropunctures, and had thus identified, linking them to the movements of the individual muscles, thirteen primary emotions: attention, reflection, aggression, pain, happiness, benevolence, lust, sadness, weeping, whimpering, surprise, fear, terror.

Before photographers enhanced the rapid evolution of emotions, and before joy, despair, love, pity, anger became an everyday subject, a scientist had already cataloged everything. In fact, what is Mécanisme if not an atlas of photographic emotions, of which the face is the protagonist? What is this medical book if not the very human attempt, in the words of its author, to «grasp the conditions that aesthetically create beauty», where the beauty of the face is always «the beauty of emotions»?

So what is the portrait that Erwin Olaf dedicates to Lady D, in the Royal Blood series, if not the discovery of «another mechanism», of another atlas, that of the fiction of emotions?

Despite the accident in the Pont de l’Alma tunnel, despite the mangled flesh, the beautiful face of Diana Spencer’s impersonator shows no pain. And not even among the endless news images that marked the life of the «sad Princess», is it easy to recognise the truth of her feelings. Duchenne made history for having been able to distinguish the facial muscles that cause a sincere smile, the «Duchenne smile», from those that generate a hint of circumstance. Who can say what the father of modern neurology would have discovered if Lady D had been one of his patients at the Salpêtrière.