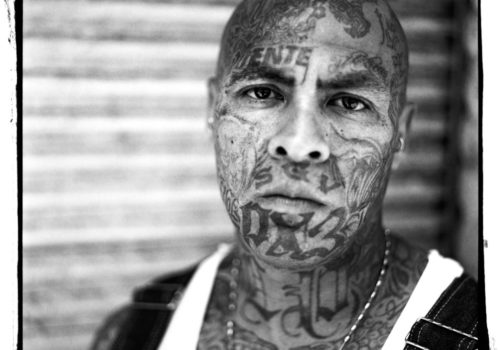 Los Angeles as the edge of the earth, as the last stretch of land before it falls off into the Pacific Ocean, and slips away to sea, carried in and out by the tides, to places far and wide. Los Angeles, as the crossroads of the world, of where people come and go,  go and come. It is a city of possibility, this life on the edge, of a world once the Wild West, and now it is freeways and concrete, a patch of grass, of land marked, territories held, of the men and women who walk these parts, a world few know and many might never have seen were it not for the lens of photographer Estevan Oriol.

Back in 1993, Oriol’s father, Eriberto, a photographer himself, gave his son a camera when he set out as tour manager for House of Pain. He began taking photographs of the world he saw, every day. Oriol remembers feeling weird about it. “Most people with cameras were paparazzi or tourists. They take out the camera for everything and nothing. I don’t want to look like that. Even now I sorta feel weird taking it out,” he reveals.

You’d never know that, looking through the selections he has culled from his archive that make up LA Portraits, his second monograph with Rome-based publisher, Drago. His first book, LA Woman, a 2009 release featuring Oriol’s unforgettable pin-ups that put the edge in sex, has since sold out. This companion volume is all things masculine. Raw, rugged, and ready for war, the soldiers in Oriol’s portraits remind us of a time and a place that have become embedded in the fabric of the American flag. It is these, the men of Los Angeles who battle every day for its streets, whose lives follow code, whose stories we cannot even begin to guess as our eyes gaze endlessly, like the eyes tattooed to the back of one homeboy’s bald head.

The eyes gaze out above a larger tattoo that covers his entire back, a girl wearing nothing but a garterbelt, modestly covering her breasts. She has wings and her wings carry above the buildings and above the cars, and underneath this woman reads the legend, “City of Angels.” Know where you are.

Oriol’s photographs do just that, they take us on a trip, an unforgettable voyage to another time and place where your boys just becoming men visit tattoo parlors and begin to get their bodies inked. Of men with guns and sunglasses and masks, of makeshift memorials on the sidewalk where something terrible happened. Of colors, certain colors, and lots of plaid. Of bandanas, baseball caps, of lowriders cruising up along, dudes posted up, uniform of the streets.

LA Portraits is that book that makes you gasp. Every turn of the page is another character, another story so noir, so dark, so heavy, so much life captured in inks pressed upon paper. There is no knowing anything other than what is seen, only the image that speaks in every language at the same time without ever saying a word. There are only the photos, one after another, showing us the hard soul of the gang world. There is a pride, and there is a purpose. And it is thru Oriols photographs that we learn this: it is not our business. It is not for us to ever truly know. We may only witness a moment in time where time stopped and the photograph was born. We look and we look, but we will never know, the who and the what and the how and the why. But we will ask. Who are these men? What of this life? It is as mysterious as it is beautiful.