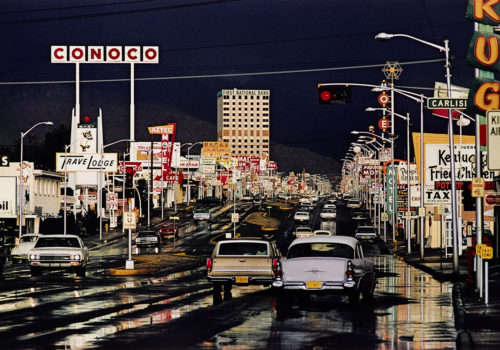 Recognized as a leading figure in the development of the history of photography in the 20th century, Austrian-American photographer Ernst Haas (1921-1986) is lauded worldwide for establishing the medium of color photography as a fine art form during a time when it was considered inferior to black-and-white. On Friday, April 9, Bonhams Photographs sale in New York will feature an important group of images taken by Ernst Haas to celebrate the centennial year of his birth. Bonhams New York Head of Photographs, Laura Paterson, commented, “Ernst Haas was absolutely pivotal in reshaping global perceptions of color photography within the world of fine art. His MoMA exhibition in 1962 was a transformative moment for the medium that inspired many contemporary photographers as well as successive generations. The group of 12 Haas photographs featured in our April sale represent a wonderful cross-section of his work, both in black-and-white and color, playing with depth of field, visual focus, and representation of motion.”

Ernst Haas was a member of the first and most important international photographic cooperative, Magnum Photos, joining in 1949 at the invitation of co-founder Robert Capa. In his youth, Haas developed a fascination for America and as a result moved to New York in 1951, where he first began photographing in color. This was considered a very risky gamble because the medium was still perceived as unwelcome within the fine art world. In 1953, the first color-picture photo essay to be published, “The Magical City,” spotlighting New York City,was featured in Life Magazine and revolutionized the medium. A decade later, Haas was honored by Edward Steichen with the first color retrospective at The Museum of Modern Art, the highly celebrated Ernst Haas: Color Photography. Artistically, Haas established new precedents in artistry, blurring the lines between photojournalism and photography as an expression of creativity. In his own words, “I want to come to the moment when, through pure concentration of seeing, the composed picture becomes more made than taken.” In 1986, the final year of his life, Haas was honored with the prestigious Hasselblad Award.

In addition to the selection of photos by Haas, the sale will feature highlighted lots by leading 20th century photographers, including Ansel Adams, Man Ray, and Peter Beard to name but a few. Peter Beard, who died in April 2020, is known for his contribution to wildlife photography throughout the 1960s-70s and one of his most celebrated photographs, Orphaned Cheetah Cubs, is included in this sale. It is estimated at $40,000 – 60,000. Leading the auction is a work by Ansel Adams, Moonrise, Hernandez, New Mexico, estimated at $50,000 – 70,000. Taken at dusk on the side of a highway in 1941, this photograph has been called “a perfect marriage of straight and pure photography,” and considered to be a seminal image within Adams’ oeuvre. The photograph included within the sale was originally given as a gift from Adams himself to gallerist Lee Witkin. Another highlight in the sale is the original print of Leg Warmers, a 1979 photograph by Harvey Edwards, world-renowned dance photographer. Sold for decades as a poster, Leg Warmers has been featured in well-loved feature films and television programs, Sixteen Candles and Friends, among others. A portion of the proceeds of the sale of Leg Warmers will be donated to St. Jude’s Children’s Research Hospital. The sale also features May Ray’s Noma Copley’s Hands. Taken in 1949, this photo of Noma Copley is a stunning and delicate depiction of Mrs. Copley, jewelry designer, art collector, philanthropist—and dear friend to May Ray. Signed and inscribed with ‘For Noma’ in pencil, this lot comes from the collection of renowned writer and playwright David Mamet. The photograph is estimated at $15,000 – 25,000.