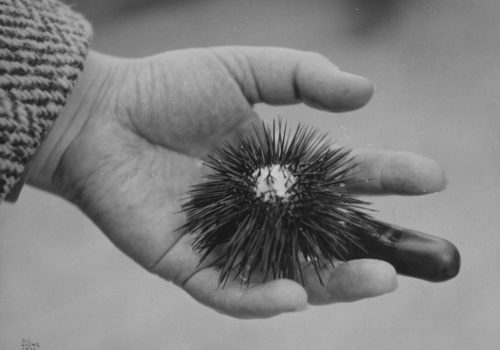 In connection with the 40th anniversary of the Centre Pompidou, the Eli Lotar exhibition at the Jeu de Paume is a co-production between the two Parisian institutions. Gathering about one hundred vintage prints as well as documents, it is the first retrospective dedicated to him, who was a photographer, and a filmmaker. It is the work of curators Damarice Amao, Clément Chéroux, and Pia Viewing.

Of Romanian origin, Eli Lotar (Eliazar Lotar Teodorescu, , 1905-1969) came to France in 1924 and quickly became one of Paris’s first avant-garde photographers. Close friend of Germaine Krull, who taught him the craft, he was later friend  of the surrealists, he published in avant-garde journals (Vu, Jazz, Arts et Métiers Graphiques) and participated in several major international exhibitions, some of which were Fotographie der Gegenwart, Film und Foto, and Documents de la Vie Sociale.

Eli Lotar’s work is, at the same time, part of the documentary reporting tradition and part of the surrealist mouvement, highlighting the duality between realism and lyricism present during the inter-war years. It shows social injustices and poverty, industrial progress and its repercussions on daily life, and also the great sensitivity he focused on the world. Between 1927 and 1932, the most intense period of his photography practice, Lotar took the urban and industrial landscape of Paris and its surroundings as subject. He also lingered over the new fascinating objects that modern life had to offer: planes, boats, trains, rails, railroad signals. He photographed the details, varying the points of view, confirming his affiliation with the avant-garde.

Eli Lotar’s social and political engagement, as well as his taste for collective work, proves itself in his many collaborations with the literary avant-garde  (Jacques Prévert, George Bataille, and the magazine Documents), with theatre (Antonin Artaud and Roger Vitrac), and even filmmakers (Joris Ivens, Alberto Cavalcanti, and Luis Buñuel).

The exhibition’s thematic organization showcases the diversity of subjects photographed by Eli Lotar: l’Institut des sourds-muets (Institute of the Deaf-Mutes) and the Quinze-Vingt Hospital dedicated to the visually impaired, the abattoirs de la Villette, the lives of Parisian prostitutes, the world of live performance, the landscapes of the Mediterranean, and even the archeological sites in Greece at the beginning of the 1930s.

By bringing together vintage prints, unpublished images (photographic reproductions from a stock of negatives), documents (reproductions of newspapers and illustrated magazines), and films, the exhibition presents a visual saga demonstrating the ensemble of Eli Lotar’s photographic and cinematic practices.