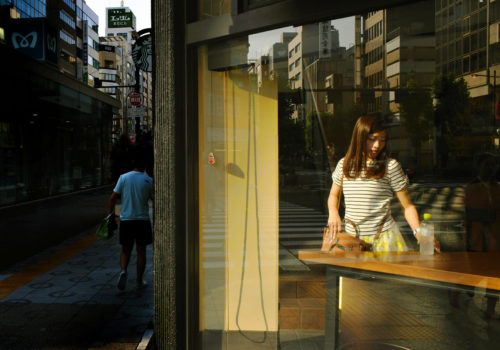 Jean-Christophe Béchet has been pursuing for several decades a photographic work characterized by a photograph taken in the street, on the go, or what is called Street photography whose name has been perpetuated in the American photographic tradition as a genre.

In this new book, he revisits photographs taken throughout his career which particularly questions the different situations of this type of photography. He wishes through a hundred selected photographs and three interviews with image specialists to question what this photography is, what it can bring into play, trying to define certain contours.

“Long associated with “reportage”, it quickly became, I believe, an independent genre and even, I dare say, a specificity of photography. The portrait, the landscape, the nude, the still life… all these themes come from painting. The notion of reporting also exists in video, cinema or radio. Whereas the exploration of the street, of its daily life, of its “extraordinary” banality only really exists in photography. I even see it as its essence, its ontology. Moreover, most of the vocations of photographers were born by seeing snapshots captured in the urban space, those of Kertesz, Cartier-Bresson, Robert Frank and so many others (…).

Street photography has long been assimilated to the generic theme of “reportage”, particularly in France with the works of Kertesz, Cartier-Bresson, or Ronis, for example. However, it seems to me that today we must separate these two areas. The reporter, and even more so the photojournalist, works either on moments of crisis (in the context of “news”) or on strong and scripted stories (magazine subjects).
The “Street Photographer” captures unique snapshots by focusing on low times, everyday and banal situations, without significant event. On the visual level, he is not helped by the power of his subject, all the interest of his photo will come from his art of framing, his speed of action, his impertinence, his reading of light . And also, of course, his vision of the world. »