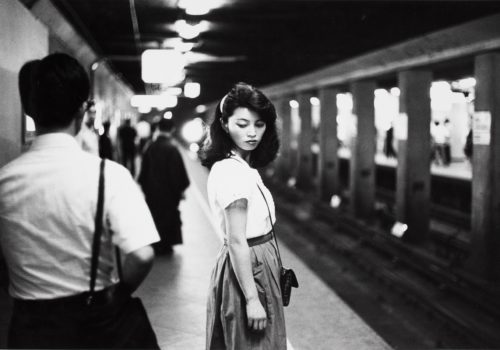 Ed van der Elsken pursued a form of aesthetics, of visual truth devoid of any artifice, and a type of impudent, sensuous beauty. He was fascinated by proud, spirited, eccentric characters who crossed his path. Van der Elsken’s first book, Love on the Left Bank (Un amour à Saint Germain des Prés), appeared in 1956, a year after van der Keuken’s groundbreaking We Were 17 (Wij zijn 17), and immediately garnered attention for its innovative approach. Adopting the form, both commonplace and original, of a photo-novella, Ed van der Elsken tells the story of a group of young men and women, part poets, part thugs, who flirt with drugs and alcohol in Paris, a city still recovering from the war.

The group of youngsters revolves around Vali Myers, aka Ann, a young woman of animal sexuality who would become the photographer’s muse. She was a “Beatnik gypsy mystical witch who reigned over the rain-soaked streets,” as Patti Smith described her, having stumbled upon the book in a secondhand bookshop in Philadelphia. “She mirrored what I aspired to aesthetically—to be unconscious of style, yet style itself. Her subterranean world seemed emblematic of all I hoped to attain: in a word, freedom.” This solitary tragic figure, whose impudence masks great fragility, becomes the focal point around which van der Elsken builds a story set against the backdrop of Chez Moineau, a bistro on the corner of rue du Four, frequented by Guy Debord and his Lettrist avant-garde.

While van der Elsken may have seen himself in the bleak vision of this bohemian, even criminal, youth of Saint Germain des Près, he was able to keep the distance necessary to photograph them, not always with their consent, treading a thin line between documentary and fiction. He was drawn to nightlife, with its gritty atmosphere, artificial lights, smoke, and reflections in windowpanes and mirrors. The same eloquent darkness has become the trademark of the work of Daido Moriyama. Van der Elsken’s murky, uncompromising images convey a tangible sense of disillusion. His camera confronts worn-out faces, blank stares, intertwined bodies prey to alcohol, cigarettes burning in the corners of their mouths. According to the Dutch writer and playwright Willem Jan Otten, van der Elsken “captures the moment when his subject becomes self-aware, engaged, as well as self-eroticized.” Vali Meyers recalled these difficult years in a letter she wrote to the photographer in 1979: “It was long and painful, a world with no illusions, no dreams… It had an extreme, dark kind of beauty, like a Russian short story, something out of Gorky, and that I will never forget. We lived in the streets and neighborhood cafés, like a pack of stray dogs, obeying the strict hierarchy of the tribe.”

Thirty years later, Nan Goldin painted a similarly raw portrait of such uprooted youth (The Ballad of Sexual Dependency). In a text published in the New Yorker last February, she expressed a profound admiration for the Dutch photographer. “When I was introduced to his work, I felt incredibly close to it. It felt the most tender to me, unbelievably sensitive, and so full of love.” Both Nan Goldin and Ed van der Elsken are obsessive photographers. “I want to immortalize people like me,” said van der Elsken. If his immediate surroundings provided him with ideal material, the world offered a cruel mirror into which he gazed with sincerity, fairness, and insight. Van der Elsken is often described as a hunter instinctively tracking his prey. He decided to become a photographer when he discovered Weegee’s Naked City (1945). No other photographer had ever depicted a city so intimately, with such a sense of amorality, complicity, and humor as the artist who signed his work Weegee the Famous. Like Weegee, who chronicled New York life, van der Elsken compulsively photographed Amsterdam.

Wherever he went, he tried to establish a relationship as direct, or as stealthy, as it was intense, focusing on people, beyond simple appearances. “I don’t need to talk for hours,” he used to say, “because I can see everything in a matter of seconds.” Like Filip Dlugosz, the main character of Krzysztof Kieslowski’s film Camera Buff (1979), whose world is turned upside down the day he gets a camera, van der Elsken sees the world only through his viewfinder. He has created his own story by assuming, in a rare act of freedom, total control over its use. At once a voyeur and an exhibitionist, he would often photograph or film himself naked in bed with his lovers. In his last film, Bye (1990), he unabashedly recorded the implacable progression of his illness, showing the scans of his tumors or lingering over his surgical scars. His films are filled with intimate moments that plunge us brutally into the inner life of another. Sex, birth, love, illness, and death are recurrent themes that painfully weave through van der Elsken’s career. From the very start, he seems to have made an “autobiographical pact” with the viewer. This is also the path followed by some American avant-garde filmmakers such as Jonas Mekas, who kept a film journal for over twenty years. “I sing life,” van der Elsken said at the end of his film Camera in Love (De verliefde camera). “I am not a complicated man. I celebrate everything: life, courage, beauty, but also anger, blood, sweat, and tears.”

Van der Elsken always advocated a “subjective approach” in photography. He felt at ease in narrative modes that eluded the reductive dichotomy between documentary and fiction. As the British art critic David Campany points out, van der Elsken’s work is rooted in his tenuous attitude towards the genre of news story, as well as his capacity for empathy with the reality of daily life. Defying conventions and subverting expectations, van der Elsken’s visual experiments draw on his insatiable curiosity about the world. He dreamed about having a camera implanted in his head to be able to capture reality nonstop. Technological advances could never come fast enough for him. Unable to invent his own technologies, he would improve his equipment as far as possible, “to take life by the horns.” “I am a thoroughbred cameraman.” This is how he described himself, seeking, by any means, to bridge the gap between human and machine. The camera was an extension of his body and sometimes guided it. Like William Klein and Robert Frank, van der Elsken never ceased to explore the interstitial space between the individual image and poetry born in motion that shatters our customary ways of looking and thinking, inviting us to develop a lived relationship to images.

The book offered van der Elsken a medium for translating the intensity of life into the rhythm of pages. He was able to spend endless hours over the layouts of his publications, trying to find the best possible combination, amending formats. Passionate about graphics and design, the photographer handled the composition of two of his books himself. Jazz (1959) is a free-flowing, spirited ode to a musical scene that had just made it to Amsterdam. Large-format Sweet Life (1966), in turn, brings together some fifty images, selected among five thousand photographs from a fourteen-month journey around the world van der Elsken undertook with his wife Gerda. Other books followed, about Paris, Amsterdam, and Japan: De ontdekking van Japan [The Discovery of Japan] (1988). These black-and-white publications gave way to color photography books: Eye Love You (1976) and Avonturen op het land [Adventures in the Countryside] (1980) — a tribute to the life in the Dutch polders.

For van der Elsken, photography was not a stable object, something fixed once and for all. He could expand the frame at will, publish the picture or use it in a book, project it on a screen, turn it into a slide show, as evidenced by film clips from Eye Love You and Tokyo Symphony shown in the exhibition. These slide shows were re-edited after the photographer’s death based on his “sound script” and countless color images. “The day I am no longer able to make pictures, I am dead,” declared Johan van der Keuken shortly before succumbing to illness. Both artists would film until the very end. Over his forty-year-long career, van der Elsken was able to assemble an oeuvre that celebrates life: a thoroughly consistent body of work constructed with absolute freedom. He made no more difference between media than he distinguished between artists and non-artists. As David Campany put it in his preface to the exhibition catalog, “he was his own medium.” All he needed was to lead a full life, and images simply followed. On his deathbed, he finally claimed the recognition he had spurned throughout his life. “Even while I am still hesitant to use this word, I think I have been an artist all my life, in the way that I responded to and expressed the outside world and my own emotions.”

Cathy Rémy has been a journalist at Le Monde since 2008, where she features the work of young photographers and emerging visual artists. Since 2011, she has contributed to M Le Monde, Camera, and Aperture.