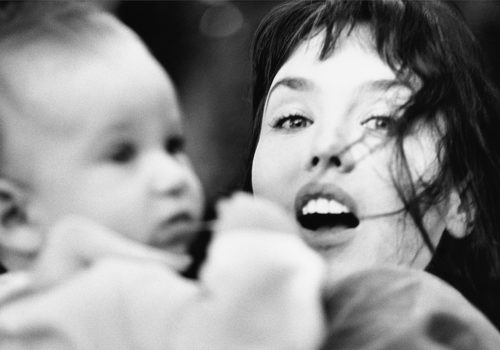 That a photograph should be more beautiful than the model is far from self-evident. I’ve heard a very famous actress once say to Dominique Issermann: “I should be photographing you, you are the real star.” The actress was sincere. But wasn’t there a note of reproach? That clear, unyielding gaze, what does it seek?

It pins you down in a light-making machine, an unlikely but merciless contraption, an invention worthy of Man Ray: the lines of a double railing or boxing ring ropes reflected in a cutter mirror fall across your face. Your eyes no longer see anything, your pupil contracts to a pinpoint, as if directly plugged into the shutter that opens and closes right in front of your face. It seems that this repetition machine does nothing but drain your soul which struggles a little against the gentleness of the assault, capturing its most secret volatile element, even while a sort of aesthetic miracle—a miracle of automated surgery—is being performed on your skin: having stored up light, it spits it out, like a fluorescent Virgin tucked away in a dark recess.

This is how Dominique Issermann might have created the most beautiful portraits of Catherine Deneuve, Fanny Ardant, and Isabelle Adjani: by turning pallor into a system of emotions, by drawing out, the way Renaissance painters or anatomists do, the rich texture of the nervous tissue and turning the minutest piece of the exposed skin into an exquisite detail. Appearing to hardly touch her camera, Dominique Issermann has guided her models through a process of vampirization (her voice which emanates from the corners of her studio is more like the voice of a trainer, a confidant, or even the voice of the mirror itself). You will be forever unsettled by this vampire: you can sense she is ready to bite and you feel the tip of her finger brush against your skin.

Hervé Guibert, who died of AIDS in 1991, was a writer, photographer, journalist, and a photography critic. He worked for Le Monde between 1977 and 1985, and is the author of the famous autobiographical novel, The Friend Who Didn’t Save My Life. His text on Dominique Issermann appeared in issue no. 4 of FEMME Magazine in 1985.