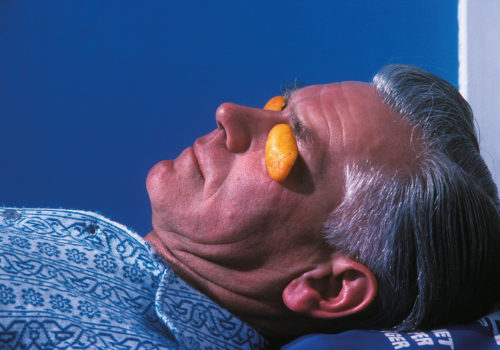 Colour Works is a collection of images Homer Sykes made during the 1980s and 90s. This was a golden period for magazine commissions; they were the Thatcher years. A gilded and confident yuppie generation spent freely, there was a new hedonistic, ‘never had it so cool’ loads of money mentality. As a result advertising was plentiful and adventurous; the new colour magazines prospered and commissioned photography as never before.

There are many sides to Homer’s work: hard hitting news stories such as the Miners Strike, the siege of the Iranian Embassy, the Women’s Peace Camp on Greenham Common or the Brixton riots. Alongside this he also covered broader social issues such as poverty, housing and rural life.

Much of the work in this new book was commissioned; Homer was constantly busy covering so many different subjects, not just British Life as featured in this book but also on international assignment. He photographed with

a subjective eye for an objective purpose, and was given great freedom in the editing of his work.

In Colour Works: the 1980s and 90s, he has brought together some of his favourite images in a cohesive edit of over 140 photographs. They tell a very British story, in his unique way. The book includes extended captions, not just a place and date, but information that offers a social and historical standpoint to give the reader another perspective.

Homer Sykes published his first book in 1977. Since then he has published over 16 more books. He has featured in magazines worldwide and has exhibited widely, with his first show being held in 1971 at the ICA, London.

In 2014 the prestigious Maison Robert Doisneau museum in Paris gave him a one man show, the first ever for a British photographer.

Dewi Lewis Publishing, in collaboration with Homer Sykes, is launching a Kickstarter campaign to publish his next book Colour Works.

To find out more please visit: