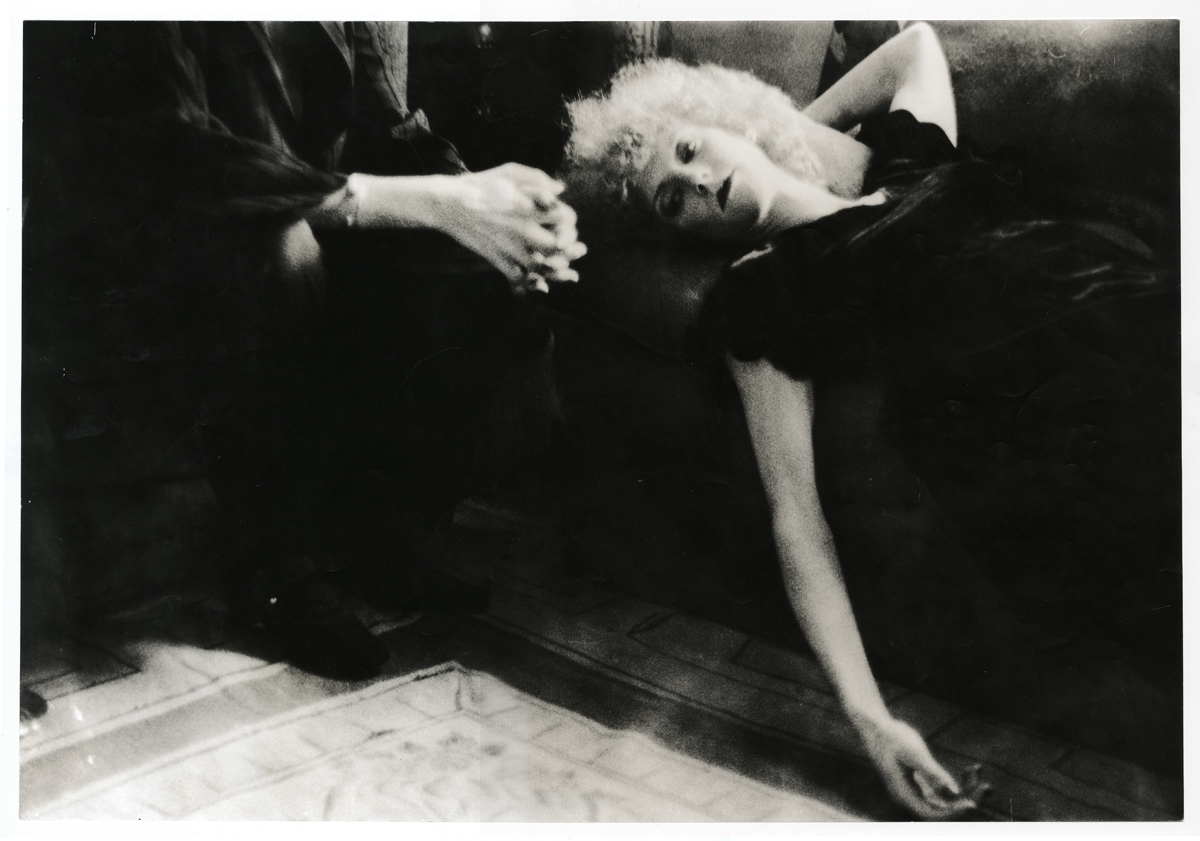 Deborah Turbeville (1932-2013) is known for her iconoclastic fashion photographs, elaborate tableaux that depict brooding, introspective models wearing haute-couture clothing and posed in barren, desolate settings. Her pictures were widely published in the editorial pages of Vogue, Harper’s Bazaar, Essence, Nova, Mirabella, The New York Times Magazine, and other major publications. An exhibition of her works, particularly prints and collages,is now on view at Deborah Bell Photographs.

A former fashion editor for the The Ladies Home Journal, Harper’s Bazaar and Mademoiselle, Turbeville began taking photographs in the 1960s; however, she had no formal training until 1966 when she enrolled in a six-month photography workshop given by Richard Avedon and the art director Marvin Israel. As Turbeville told The New York Times in 1981, “If it hadn’t been for the two of them, I wouldn’t have taken my photography seriously.” Another mentor was Gösta Peterson whose free-form approach with animated models greatly inspired Turbeville. She also acknowledged the influence of European films of the 1970s, especially those by Bertolucci and Antonioni.

Editorial fashion and advertising photography was changing radically in the 1970s, as evidenced by the work of Guy Bourdin and Helmut Newton whose models conveyed sexually powerful creatures. Turbeville’s unique approach was her focus on the interior life of women. Her models are depicted as languid, preoccupied, disconnected and unencumbered – as if they inhabited a world without men and were not performing for or reacting to men. Turbeville’s photographs were an anomaly in the era’s context of hyper-objectified models posing as sirens.

In her landmark book of 1979, The History of Fashion Photography, Nancy Hall-Duncan describes the controversy caused by Turbeville’s feature on swimwear, photographed in the shower room of a condemned New York bathhouse for the May 1975 issue of American Vogue: “Turbeville’s bathhouse shots were decried as evoking the grisly aura of a concentration camp or the frightening vacuousness of a drugged stupor.” Considered shocking when they appeared in the magazine, these pictures are now among the most famous fashion photographs of the 20th century.
Hall-Duncan goes on to describe the timely significance of Turbeville’s work: “In a broad sense, her pictures reflect psychological dislocation in the modern world. … The slouching posture, creating a disturbing and uneasy mood, has become one of the marks of Turbeville’s style. … By subordinating the fashion itself and venturing into a vague borderline area between clarity and confusion – Turbeville questions the very basis of fashion photography and subverts the traditional idea that fashion should be shown clearly.”

Turbeville described her philosophy in the introduction to her book Wallflower (1978): “Through a series of vignettes in stills, I wish to use the medium of photography to explain a group of rather eccentric people – sometimes one or two, sometimes many – placed in settings that help describe them. These people perform like a repertory company, often reappearing in different roles.My pictures walk a tightrope. They never know. … I am one of the very few ‘enfants terribles’ still claiming to take fashion photography. I am not a fashion photographer, I am not a photojournalist, I am not a portraitist.The photographs are a little like the women that you see in them. A little out of balance with their surroundings, waiting anxiously for the right person to find them, and thinking that perhaps they are out of their time. They move forward clutching their past about them, as if the ground of the present may fall away. Their exteriors seem walled-up and introverted; the interiors endless…airless. The very print quality reflects something in the women that is hesitant, a little faded and scratched; or that, having emerged into a light too harsh, stand frozen in space, overexposed.”

Turbeville was not only prolific and internationally published as an image-maker, but was also a maverick printmaker. She used unusual papers, experimented with toning and alternative processes, and intentionally scratched her negatives. Never in search of the pristine object, she strove instead for imperfection and a sense of timelessness. She often constructed collages of photographs that are either pinned or taped to hand-made paper, imbuing the works with a sense of decay and enabling their deterioration. These documents are now revealed in this exhibition that sheds light on her earlier techniques.