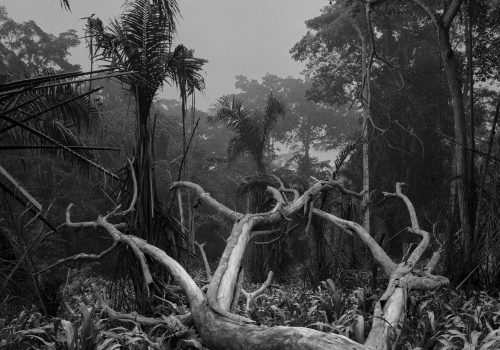 The CRP/ presents a preview of works by five of the fifteen artists awarded the national photographic commission “Flux, une société en mouvement” [Flow, a society in motion], lanched in 2018 by Cnap (Centre national des arts plastiques) in partnership with the Ministry of Culture. The CRP/ supported this national commission project in conjunction with the photography centre Diaphane in Hauts-de-France. It will be presented in its entirety in the autumn of 2020 at Photaumnales in Beauvais.

Echoing the various meanings of the word “flow” (spanning fusion, stream, information transmission, ensemble movement and fluctuation), the selected artists used this commission to develop unique artistic research exploring the materiality of the image, some of them reinvestigating pre- digital photographic techniques, including the view camera, platinum prints, carbon prints and photogravure, concretely translating the subject of the flows that cross landscapes.

At the CRP/, the works of the four individual artists (Nicolas Floc’h, Eric Guglielmi, Ilanit Illouz and Florence Paradeis) and one artist duo (Mathieu Farcy & Perrine Le Querrec) show the environmental and social concerns that economic flows have lastingly churned up at the global level.

Their works offer different approaches to images, inviting visitors to roam wooded, underground, underwater and mental landscapes, and to become aware of how flows influence our everyday lives.

Natural environments are the result of multiple ecological and socio- economic processes.They are deeply shaped by erosion, by land appropriation and use policies, and by production and exchange systems. Humans no longer fear the forces of nature, but rather the effects of their own actions. The role of scientists is to analyse these processes in order to understand them and raise awareness, but mediations are often necessary so that   we can really grasp the significance of their message. Artists have played this role and continue to play it today; through their works and their formal research, they mediate the social phenomena shaking up our societies. Our perception and view of natural landscapes has always been influenced by artistic representations that contribute to forming “an anthropology of nature”. Photographers also contribute to an ecology of the landscape by showing transformed landscapes and adapting their techniques to their subject of investigation in an original way.

Standing out in the foreground, enormous tree trunks are strewn over the lush floor of the tropical forest in the Congo Basin, their roots lifting towards the nearby foliage. In his series Paradis perdu, Eric Guglielmi records the disturbances that imperil the balance of the world’s second-largest tropical forest. This verdant mass of ferns, lianas and giant trees is seriously threatened by an unregulated wood industry, particularly by overexploitation of precious species and large, devastating agro-industrial projects like the mass-planting of oil palms, to which the scourge of fires is periodically added. Eric Guglielmi seizes upon the damage ravaging the forest: felled trees, holes in the paths. The environmental and social consequences are dramatic: plundered forests, decimated fauna, local populations facing the disappearance of a culture and way of life based on ancestral adaptation to the subtleties of a complex biotope. The plate’s sensitive surface captures changes in landscapes photographed with a view camera. The platinum- palladium prints reproduce the deep identity of condemned plant-paradises. The dense, mat blacks and the grey shadings emphasise the mysterious beauty of an environment imperilled by a brutal economic logic.

The three series Structures productives, la Couleur de l’eau, and Paysages productifs – bulles by Nicolas Floc’h, produced in the context of the “Flux” commission, connects photography with the history of art and forms. His work generally takes a plastic approach that links various artistic mediums (installations, films, sculptures). Through these three series, some of which were started over ten years ago, the artist reinvents the too-often stereotyped genre of underwater photography, contributing to a history of territories   by documenting various maritime facets, similarly to the photographers who embarked on the famous photographic missions in the history of photography. For the series Paysages productifs – bulles, following on from his research carried out with scientists on the acidification of oceans and their decreasing biodiversity, Nicolas Floc’h visualises these processes by photographing acidic underwater sites by natural light in the Mediterranean, in this case Vulcano in Sicily. These zones heavily impacted by the presence of CO2 prefigure the future state of oceans affected by the gradual disappearance of algae and corals. His photographic project Bulles alerts us to the fragility of this ecosystem, and through this unusual subject, it renews contemporary landscape photography, showing—despite everything—all of the plastic beauty of the energy flows swirling in the columns of water rising from the underwater depths.

Ilanit Illouz’s special line of research approaches the land through geology and landscape, as well as through the social and geopolitical consequences of their exploitation. She roams territories in search of signs of the migratory and economic flows that have marked them. Organic and mineral debris collected during her walks—photographed and narrativised—decrypt the history of those palimpsest landscapes.

For “Flux” and the Petra series, she assembled a set of images of ores photographed in the Musée de Minéralogie at Mines ParisTech. Natural resource exploitation is a source of instability and conflicts. Certain ores (such as germanium, titanium, graphite and coltan) have a strategic importance because of their uses in high technology. The photogravure diptychs connect these precious metals with the gestures practiced during their manipulation in civilian industrial practices (smartphones, GPS) and in military ones (grenades, missiles, compasses). This highlights the link between our behaviour as consumers and the predictable exhaustion of underground resources.

The massive flow of the images that run through our lives is the repertoire that Florence Paradeis mines in order to construct her quirky images, which have the distance of a displaced, “reinjected” protean reality whose vibration, tensions and contradiction she reproduces. In the series Des jours et des nuits, she questions movement in a sequential composition that alternates between still lifes in the studio and indoor or outdoor mises en scène, inviting the viewer to instinctively follow her mental “flow” in order to interpret and interlink the images. She thus presents a small theatre of images, some of which symbolise the flow of time like vanitas, while others symbolise the questions, resistance or non-resistance of everyday characters confronting the general flow of exchanges and circulations to which they are constantly subjected.

How can an artist situate himself or herself in relation to the stream of images and information, flowing at an accelerated rate? Together, photographer Mathieu Farcy and writer Perrine Le Querrec offer a pause and reflection through jointly created triptychs, extending their respective documentary work. L’Augure, through its reference to the soothsayer’s art in ancient Rome, is a poetical-documentary chronicle linking photography, sound/ video archives and literary text in three distinct phases: an origin, a journey and a destination. Their triptychs mirror the multiplicity and interpretations of flows and changes (climatic, demographic) affecting the contemporary world.

At the CRP/, they are presenting a triptych exploring the theme of the climate, highlighting the interdependence of all of the earth’s life forms and their shared evolution, exhorting us not to content ourselves with powerlessly watching the spectacle of decline and disappearance.

“What remains once dates have passed the present covered with chlorinated froth foliage lichens crumpled newspapers rolled into balls burned in dumps their smoke also poisoning the coral the oceans. 1”

Florence Paradeis is represented by In Situ – fabienne leclerc, Paris.