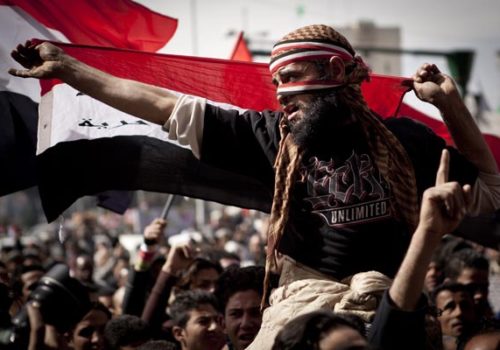 The 25th January 2012. Was the first anniversary of the Egyptian Revolution Tahrir Square was crowded, from the top of the hotels surrounding the square we could see numerous Egyptian flags. Were people celebrating? Not really. The population was still waiting for a democratic transition, many accused the military rulers who replaced Mubarak of derailing the revolution. Numbers of protests and marches were organized to ask the Supreme Council of the Armed Forces to transfer power immediately to civilians. Meanwhile, elections were going on for the new parliament and the Upper House and ended by a victory of The Muslim Brotherhood.
The situation seemed to be quite for a month, until the massacre after a football game in Port Said that left 74 people dead. For 6 days, protesters faced off with police in Cairo in deadly clashes sparked by anger at the failure of Egypt’s military rulers to prevent football-related violence. Those clashes left at least 12 people dead and more than 2,500 people wounded. Police was using tear gas and shotguns.
On the 17th of March 2012, the pope and Father of all the Coptic Community died at the age of 88 years old leaving behind him the whole community afraid of the growing power of the Muslim brotherhood
After a moment of quiteness, time came for the Presidential campaign . Numbers of candidates were rejected by the The Supreme Presidential Electoral Commission such as the salafist candidate Abu Ismail. A sit-in took place in the area of Abbasseya to contest the decision. This sit-in was held over a week, and was attacked regularly by unknown assailants. One attack at dawn on May 2nd and its aftermath left tens of people dead and many more injured. This lead to clashes between the militaries and protestors near the Ministery of Defense.
Finally, the situation became quite again, the presidential campaigns could go on until the 16th and 17th of May, days of the first round of the elections. Candidates Mohamed Morsy,President of the Freedom and Justice Party (Muslim Brotherhood)and Ahmed Shafiq,former Egyptian Prime Minister under Mubarak were elected for the run off.

The Revolutionaries were disappointed and angry and their two favourites candidates, Abouel Fotouh and Hamdeen Sabbahi called for a cancellation of the run off. The situation in Egypt was tense again in an atmosphere of incomprehension. Added to this, the Mubarak’s verdict didn’t satisfied the populations. Mubarak and former Interior Minister, Habib al Adly, were sentenced to life in prison but senior Interior Ministry officials were pardoned, as well as Mubarak’s two sons, Gamal and Alaa, who still await a further hearing on corruption charges.
On the 24th of June, the victory of the Muslim Brotherhood candidate, Mohamed Morsi was officially announced as the new President of Egypt. A little bit before the start of the Ramadan, Egyptians are waiting for a new beginning Under Morsi’s presidency.

Graduated in Journalism at IHECS (Institute of High Studies of Social Communications in Brussels) in 2011, I’ve also attended a semester at the Danish School of Media and Journalism in order to increase my formation in the field of photojournalism.   I am currently a correspondent photographer for the agency Wostok Press and a photojournalist and multimedia producer for the Egyptian newspaper Egypt Independent.  Since August 2011, Frederic Pauwels, Gaëtan Nerincx and I have created the Collective HUMA  that emphasizes social issues and puts forward a humanist photography.