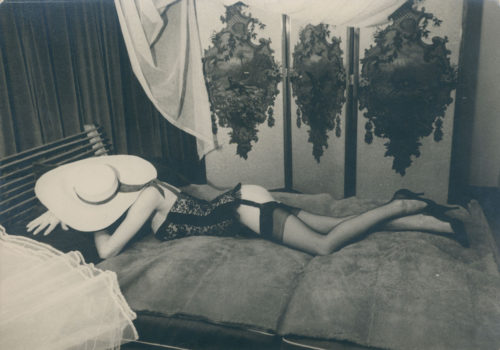 Casa Mollino is in the spotlight of the exhibition Mollino/Insides at Collezione Maramotti’s venue in Reggio Emilia. It’s quite a particular house, that reflects its owner personality and sense of style. Indeed, Carlo Mollino was a multifaceted well-known twentieth-century architect, photographer, designer, and more. And his mysterious residence in Via Napione, in Turin, has been portrayed and interpreted by the Puerto Rican-American artist Enoc Perez and by the German photographer Brigitte Schindler. Pictures of female models by Carlo Mollino are on show, too.

The exhibition, which draws inspiration from the Fotografia Europea theme “Fantasies: Narratives, Rules, Inventions”, is organized by Collezione Maramotti, in collaboration with Casa Museo Mollino. It focuses on the spirit of transformation in art and of visionary creation of alternative realities and leads directly inside Mollino’s house (now Museo Casa Mollino) as shown through Perez’s brush and Schindler’s lens. Then, we come across, the photos he shot, with models surrounded by an enigmatic imaginary.

Carlo Mollino used to be a rationalist, then refusing the rationalist school by taking inspiration from Alvar Aalto. He was somehow D’Annunzian, too, in choosing and placing objects in via Napione, while his photos verge on the surrealistic. In any case, he got a fantastical worldview.

Mollino photography was a tool for creating an alternative reality. The female body has been a recurring issue since his earliest images, inspired by Surrealism, to his Polaroids of nudes from the 1960s. He carefully chose and staged settings and accessories, so his models were included in a dedicated designed space, kind of an iconography exalting their beauty.

Since the 1930s, Mollino has been using various residences in Turin as backdrops for his portraits, including Casa Miller (1936-1942), Villa Scalero (1956-1962) and Villa Zaira (1962-). In 1968, he completed Villa Avondo in Via Napione, where he took only a few polaroids but designed a secret home for his spirit. Though he never lived there, it was something both personal and private, designed in every detail according to his vision of the world.

This very flat inspired Brigitte Schindler, whose photographs, plenty of significant details, record the unique feeling and the suspended mystery of these spaces. Mirrors, reflections, metamorphoses and revelations are the pivot points of a conceptual and aesthetic discovery journey in the world of Carlo Mollino. Enoc Perez who has been investigating 20th-century Modernist architecture, focused on those that were once inhabited by iconic cultural figures. He created large-scale paintings specifically made for the exhibition. He turns rooms into paintings, working from photographic images and adding new levels of interpretation and meaning. These contemporary reinterpretations of Mollino’s conceived alternative reality interact with Mollino’s own photographic works.

A book with essays by Mario Diacono and Fulvio Ferrari and a text by Enoc Perez accompanies the exhibition.

Carlo Mollino (Turin, 1905-1973) was an architect, designer, photographer, writer, skier, race car driver and aerobatic pilot. His architectural designs include the Società Ippica Torinese building (1936-1940), Slittovia del Lago Nero ski lift (1946-1947), Casa del Sole in Cervinia (1955), Palazzo degli Affari (1964-1972) and Teatro Regio in Turin (1965-1973). From the 1930s on, Mollino also designed furnishings – often one-of-a-kind pieces. Carlo learned the rudiments of photography in his father’s darkroom, set up in the family home in Rivoli. His first published photographs date to the 1930s. He experimented with different cameras (from Leica to Polaroid). Though he used to consider himself neither a photographer nor an artist, he pursued an interesting exploration of the medium, also writing essays on the issue.