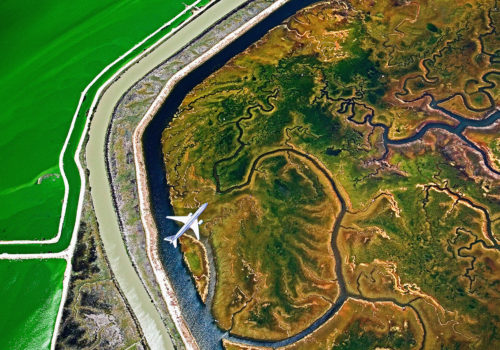 These images are from flights in helicopters at altitudes from 500 to 5,000 feet over the fringes of the San Francisco Bay and its tributaries. Viewed from above there is great beauty in the landscapes below. I grew up in this area, sailed on the bay, and fished in its tributaries, but I took for granted the wonder that is this great work of nature.

Unfortunately, commercial interests, some of which have ironically contributed to the beauty when seen from the air, have abused much of this area. By 1961, the Bay had lost 1/3 of its size to commercial and industrial interests, resulting in ninety percent of the tidal marshlands being filled in, sealed off from tidal flow, or converted to salt ponds.

Since the early 1960’s, the San Francisco Bay has been one of the focal points of the environmental movement in the United States. In 1961, the group, “Save the Bay,” formed to protect the Bay from further infill, pollution, and wildlife habitat destruction. “Save the Bay’s” success led then President Bill Clinton to credit it with launching the environmental movement. Today, a project is underway to restore 15,000 acres of wetlands.

For the past thirteen years, I have been photographing the bay, its tidelands, salt ponds, and tributaries, both to capture its wonder and to expose man’s changes to it. My select portfolio now numbers over ninety-five images. I am continuing to record the bay’s ever-changing nature, hoping someday to see a positive transformation.

San Francisco Bay is a massive water collection and discharge system, pumping billions of gallons of water daily using its tides and tributaries as engines. It is the second largest estuary in the world, and drains more than 40% of California’s land area. Each day the tides pump more than seven times the flow of the Mississippi River through the one-mile opening of the Golden Gate. This activity causes striking changes at the edges and corners of the bay, being most pronounced at its south end. These areas are like the edges of a sink left with residue after it has drained. Currents are seen creating channels of water rushing in different directions running side by side, the incoming one color, the outgoing another. As the water recedes, streams, rivulets, mud, rock, scars, and debris become visible along the shoreline with unusual light reflections and color changes. Color in the salt ponds at the southern end becomes particularly intense when algae and brine shrimp react to varying levels of salinity.