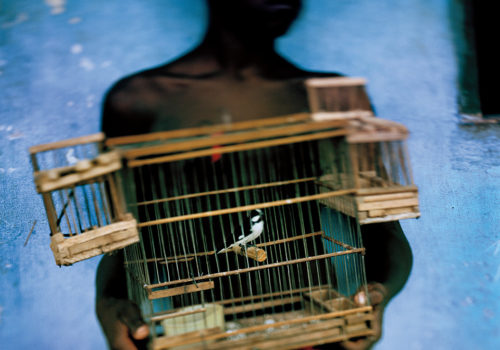 In the northeast of Brazil, there is a unique geographical area, as real as it is mythological. Marked by a semi-arid climate, it is struck by episodes of extreme drought which directly affect all forms of life. This territory is the sertão, synonymous with deep Brazil, inhabited by a people with an extraordinary capacity for resistance, viscerally attached to the land.

Amply represented through literature, music and cinema, the sertão is a subject in its own right in Brazilian photography. Its landscapes, its faces, the manners of its inhabitants, their hard condition but also their innate sense of celebration as well as their religious fervor have always mobilized photographers from various horizons. Whether it is the ambulants photographers who, in the past, crisscrossed these arid lands to offer their services where technology did not reach, photojournalists, responsible for documenting historical exoduses throughout the twentieth century or documentaries and art photographers of the contemporary scene, the sertão never ceases to challenge image artists.

Claudio Edinger (Rio de Janeiro, 1952) falls into the latter category. He began his career in New York in 1976 when he lived in a community of Orthodox Jews in Brooklyn, then in the iconic Chelsea Hotel in Manhattan, which would inspire his first book. Twenty years later, he returned definitively to Brazil to undertake, from 2005, a series of trips in the sertão de Bahia which lasted seven years.

Using selective focus, which has become his trademark over the past twenty years, Edinger captures the sertão with a lyrical, subjective, almost abstractionist gaze. He creates both an intimate and colorful sertão, imbued with sweetness, and with a touch of melancholy.