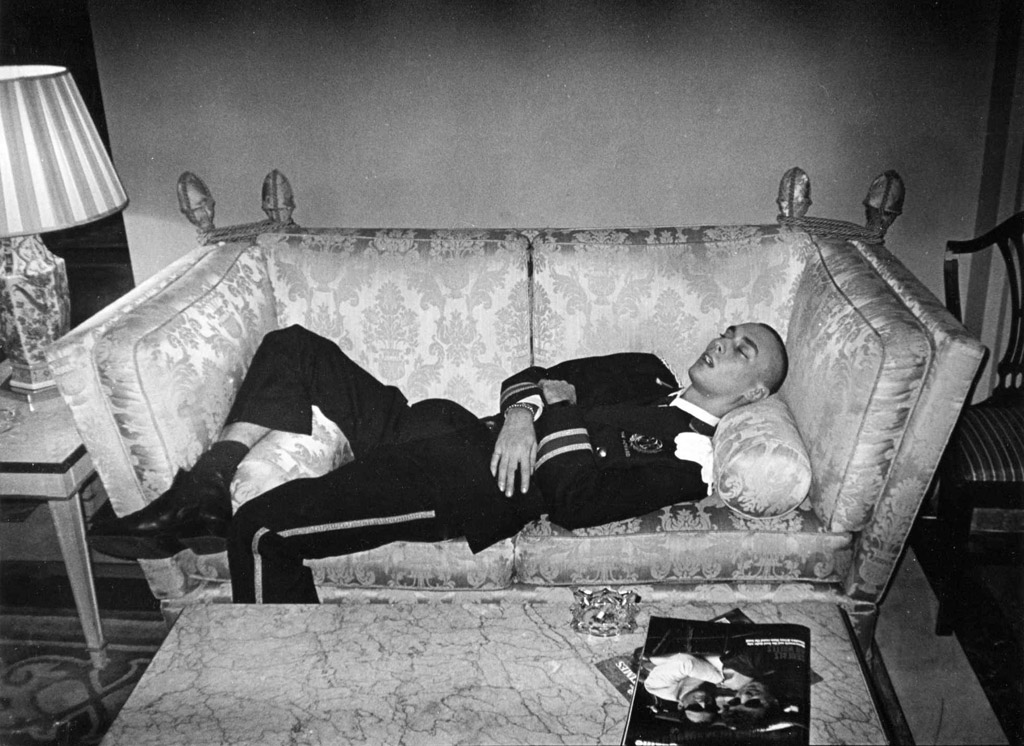 Galerie du jour agnès b. has just opened its first show of the year, with two exhibitions of three photographers’ work. The first is Night Porter & Sandy Hill with photographs by British photographer Chris Shaw and the second Studio – portrait(s) by Malick Sidbé and Omar Victor Diop.

Originally from Wallasey in northern England, Chris Shaw stumbled upon Ikko Narrahas’s photographs in a public library. One of the images from the series New Mexico, showing two bins suspended in the air, provided a turning point as it was on viewing it that Shaw decided he would become a photographer.

Shortly after, he left his native Merseyside to attend West Surrey College of Art and Design in Farnham, southwest London. He soon felt out of place among all the “little rich kids”.

Ostracised, he took refuge in alcohol and often skipped class to escape to the Sandy Hill housing estate, not far from Aldershot, where he at last found himself hanging out with “normal” people. He would talk to them through the lens of his camera, befriending the residents as he took their photographs. With his now familiar raw intimacy, he captured glimpses of everyday life and shared moments. His work was thus a kind of hybrid, midway between a personal diary and a documentary, a style that would unintentionally become his signature. As he gathered his images, he began recording the thoughts and anecdotes he shared with the community in a notebook. These off-the-cuff notes were jotted down using the same thick marker pen he used to write captions on his photographs and became the graphic extension of his pictures.

This is how he produced his first photography book, Retrospecting Sandy Hill, which was recently republished by Mörel Books.

This ‘anti-aesthetic’ style, as he puts it, finds its climax in his most famous series Life as a Night Porter that he started in the early nineties.

To avoid homelessness, Shaw was compelled to take up a job as a porter in a London hotel, where he decided to use the long and boring night shifts and his Instamatic camera to photograph the surrealistic scenes he witnessed.

Drunken clients or exhibitionists, who would sometimes end up in different parts of the hotel or locked in the toilet, worn-out staff and depressing furniture all feature in the scenes that make up the series, which takes us deep into the intimacy of people and places

The viewer becomes a voyeur, trying to guess what was actually going on while deciphering the captions scribbled in marker pen by the witness of these sleepless nights.