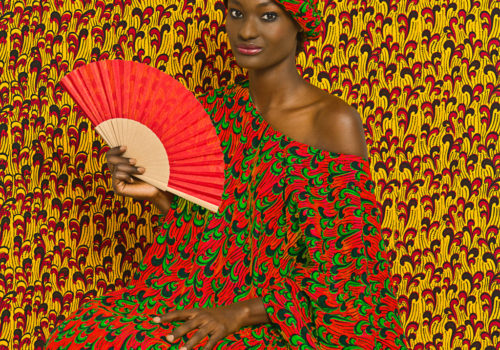 Galerie du jour agnès b. has just opened its first show of the year, with two exhibitions of three photographers’ work. The first is Studio – portrait(s) with photographs by Malick Sidbé and Omar Victor Diop, and the second Night Porter & Sandy Hill by British photographer Chris Shaw.

To look at the other and to show yourself as you are or as you wish to be seen. The photographic portrait uses and amplifies one of painting’s challenges. We first need to remember that portraiture was the first use of this new medium. Whether it be family portraits, new-born portraits, post-mortem portraits or formal portraits, cameras took over from the paint brushes and photography became the witness of these different times and social practices.

This is what we discover in the studio pictures of Malick Sidibé, Seydou Keïta’s successor. Trained as a draftsman, he became a decorator at Gérard Guillat’s studio before opening his own workspace in Bamako in the early 1960s. He took  pictures of the yé-yé generation, men on scooters and mischievous children, depicting a society in motion and particularly its youth. These pictures were intended for families: they were private photographs. Although he applies a different method, Omar Victor Diop is also an observer of our society. He has used systematic studio practices over the last ten years to position himself as a bridge between different times and different continents.

With almost 50 years between them, Malick Sidibé and Omar Victor Diop both drive photography forward whilst educating the viewer about African photography. Whether it is the portrait of a stranger or a more famous personality, it opens a poetic window on this continent.