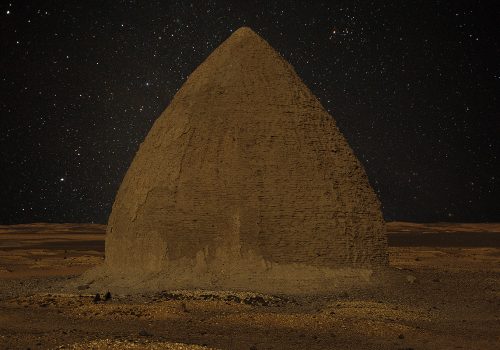 The 3rd edition of Chaumont-Photo-sur-Loire is held until February 28, 2020. It brings together French and foreign artists, linked by their particular relationship to the landscape, whether those of the Domaine or the Loire or far horizons, whether Asian, African or American. All these images are unpublished or have never been seen in France. The photographers are: Jeffrey Blondes, Christian Manolo, Henri Roy, Bae Bien-U, Juliette Agnel and Juan San Juan Rebollar. It is the work of Juliette Agnel that we have chosen to present to you.

Born in 1973, Juliette Agnel studied art and ethno-aesthetics at the Paris 1 Panthéon Sorbonne University and the Beaux-Arts de Paris (congratulated in 1999). A meeting with Jean Rouch takes her on the roads of Africa for more than 10 years. In 2011, she designed and manufactured a machine: the digital camera obscura with which she films and photographs. Supported by Michel Poivert, who invites her to the photographic seminar in 2012, her work was exhibited in South Korea, Norway and France, notably at FIAC (Galerie Françoise Paviot – 2013), at the Nouvelles Vagues at the Palais de Tokyo (2013 ), at the exhibition Close to Me by Guillaume Lasserre (2015), at Mois de la Photo (2015), at Paris Photo (2016). She has had a solo show at L’Espace Van Gogh in Arles in 2014 and was invited by Léa Bismuth, at the Tanneries d’Amilly in 2017. She participated in the Prize Discovery in Arles in 2017 with Les Nocturnes which were also be presented at the FIAC the same year. She continued her research work on extreme landscapes during an expedition to Greenland in 2018 and was invited to produce and show this work, Les Portes de Glace at the Labanque (Béthune) art center during the year 2018-2019 for the third part of the trilogy on Georges Bataille (The crossing of Concerns, curator Léa Bismuth) and in Chaumont-Photo-sur-Loire in parallel.

“This unpublished series of Juliette Agnel is the result of a trip to North Sudan, the land of pyramids and black pharaohs, made by the artist in February 2019. It had become obvious to me that Juliette Agnel had to discover and photograph these fascinating architectures that were dear to me and that crossing her gaze with Meroe was a necessity. In addition to her exceptional eye, her extreme experiences, already conducted in Mali and the Arctic, the audacity and tenacity of the artist predisposed her to live this special adventure. Even if the sand of the desert seemed, at first, to want to protect the pyramids from the eye of Juliette, Meroe could finally be revealed to her eyes and to make possible the birth of sublime images.

A JOURNEY THROUGH TIME

In addition to the Nocturnes, Juliette Agnel has produced in Sudan a series entitled “A journey through time”, where are captured, in black and white, the dark silhouettes of architectural remains emerging from the desert. The setting up of this trip in a country, so little visited, was far from simple. But when an artistic evidence is imposed, solutions always come and they were found, in the delicate context of a country marked in January 2019 by a revolutionary effervescence that led to the current political situation of the country. These are exceptional images, by their rarity, their depth, their poetry and the quality of emotion that they convey, and that Juliette Agnel brought back from this singular trip, in space and time. ”