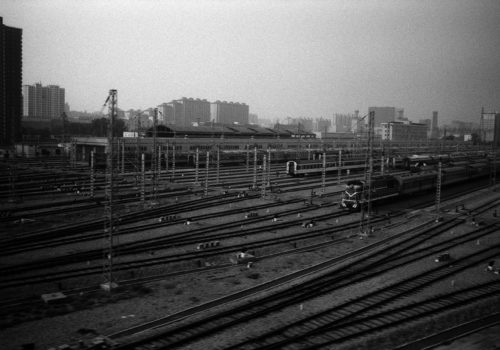 Until May 22, the Centre de la photographie de Mougins is showing Li Lang‘s images. They are accompanied by his text :

A long day in a lifetime is a precise, definite time. It is not a moment that is transformed, in our memory, into another of those anonymous “yesterdays” that reproduce themselves ad infinitum. Today and tomorrow are also part of a “long day in a lifetime” and, if repeated, will end up being our entire life.

I boarded a high-speed train; I traveled 4600 kilometers round trip and I photographed, through the window, like a statistical sampling, this landscape both familiar and unknown that is China, crossing the cities, the villages , countryside, hills, plains and wild lands.

Looking out the window, dazed, the paintings scroll by, against the flow of the train, then disappear. I suddenly had the feeling that the future was in front of me, that it was embodied by the movement.

Without this awareness, the future would be a thing of the past. Paradoxically, it seems to me that the present is non-existent. It is only when I get off the wagon at the terminus that I feel the present moment and realize the need to return to the starting point.

What is reality? I asked several people about their understanding of nature and how reality impacts them. The speeches intertwine with very intuitive reactions to life. I then become a spectator again sitting in the train, looking out the window again. In life, ordinary people are lucid observers of the world around them.

Without being aware of it, after having spent countless weeks and days without interest, we reach a blissfulness that finally allows us to be able to enjoy a peaceful life without major incidents; a condition similar to that of a spectator who look, through the window, and see nothing that concerns him.

Never forget, however, that one day the train will come to the end of its journey. Passengers will exit the carriage and return to reality. Reality is not this landscape that passes behind a window, calm and silent. We only have this feeling because we are unable to hear the sounds outside.