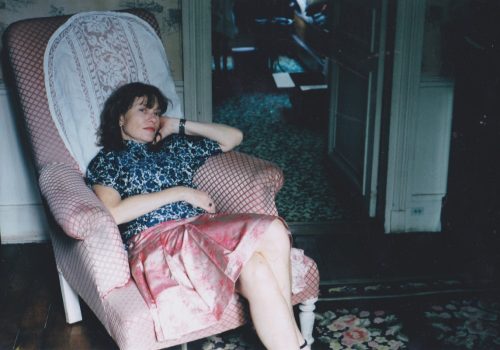 This book is great. It is the result of a rare friendship between a photographer and an actress. Carole Bellaïche tells it so.

I have been digging in my boxes since 1993 to find the images of Isa, as I called her for a long time, and I often say that I have a lot of luck to have met her, since at the end of these twenty-five years of working together, more or less scattered, we still have the opportunity to continue our “project”, these photos that we call “for us”, all these images that will tell a story , and who are in this book. The story of an obsession, an obsession for me to collect images, and an obsession for her to get into a frame may be?

This book on and with Isabelle Huppert is obvious to me since our first meeting. I would like to say that with her, I found the ideal and extremely present model: an accomplice, player. A great actress, of a rare singularity, who never tires of these moments of shooting, with whom everything is possible, and who by a strange faculty changes without really changing. Her face which is so familiar to me now, always surprises me, seduces me, fills me in this permanent and obsessive search for the ideal, and the beauty.

I live this story as a passion, where for each photo shoot, every moment and every trip, I find her, not quite herself, nor quite another. I always have this desire to photograph her, and to make new images of her as a challenge, to reinvent it on one side, and to show it as it is on the other. We have always looked for this ambiguity, inventing images of all kinds is our great game, there is our complicity.

The first time I approached her was thanks to the Cahiers du Cinéma, with which I was then working. They brought me to Lausanne, where she was rehearsing Orlando. The Cahiers conducted an interview with her. The very first photo I have of Isabelle Huppert, actress, is the photo on stage of a very handsome man, in the geometric light of the absolute precision of Bob Wilson – she was Orlando. A man at the start, who magically becomes a woman, a troubling figure who spans the real and the time. Like she somehow. The next day we greeted each other, at the time of the interview with the journalist, and we made some photos in the large garden of the hotel. That was all.

The year after that we really got to know each other when she was preparing her “special editor” number. It’s been two years since I had been working for the Cahiers du Cinéma, a period full of exciting encounters. I had to take a picture of her with Claude Chabrol in a hotel in Paris.

I quickly understood, by the complicity she showed me that day, that this meeting was going to be special. I was not wrong.

It was obviously love at first sight for me, especially when she called me, one fine morning, to ask me to photograph her as Marlene Dietrich because Louis Malle wanted to make a film on Marlene; the project was also abandoned, but we had our photos. That’s when our long story began.

For all these years, I have not stopped photographing Isabelle Huppert. Each series is a different moment, she is transformed, she is another, she escapes us, mysterious. The meetings revealed to me little by little the relationship of Isabelle to photography, as strong as with the cinema or the theater, but daily and instantaneous. Isabelle loves photography, the lens of the camera, her mirror. She likes photographers, I would even say she uses them in her own way. I often say, possessive as I am, that she loves them too much.

This book tells of our relationship photographer-model, but also of the rise of a star. Very well known when I met her, she now has become an icon. Above all, she has always been an immense actress, bewildering with her intelligence and her play. She knows, I think, that she has a sort of truth. When we meet her in the street, we do not recognize her, or hardly.

I have always tried to understand the mystery of the star, the idol, it is a research that fascinates me. Who is Isabelle Huppert? A myth, a model woman, a muse for many, and a heroine of our time.

I now want to make these images public, mostly unveiled.