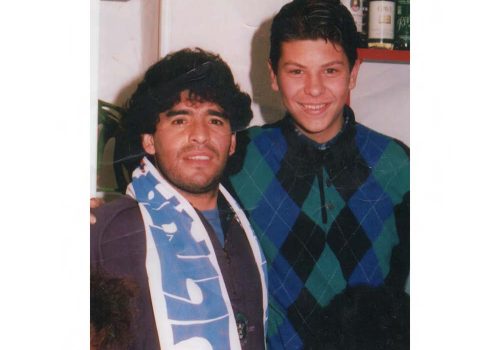 A year ago before the premature death of Diego Armando Maradona I started collecting pictures of Neapolitan people with Maradona for a project of mine called “La Foto con Dios”. I am walking around Naples, the city where he showed his soccer skills and acquired eternity, with a scanner in my bag and I am randomly asking people if they have ever had the pleasure of meeting with God himself and took a picture with him.

For a Neapolitan, having a picture with Maradona during those years (1984-1991) was the accomplishment of a lifetime, and who had such a luck usually preserves the picture very carefully (sometimes it is framed and hanged by the bedroom) and brags about it as often as he/she can.

It is a fetish, that testifies the presence of God, in flesh and bones, through the alleys of the city and shows the extreme devotion of the Neapolitans for him.

Behind the photos there are usually stories that tell about that fanaticism. The long wait outside a restaurant to get a shot, the decision to name a daughter like Maradona’s fiance after an encounter with him, or bragging to have had the possibility to hug him while usually he was rejecting any kind of physical contact from unknown people.

I have decided to embark on this project to preserve a piece of collective memory of the city, and finally put together a family album which is also a tale of love.

I am truly saddened for his departure, as you may imagine. My desire was to bring back that family album to him, and take myself a picture with God. Which could be the only reason I started the project in the first place, because it was maybe the only possibility to get to him.

The project has been hault for the past year due to the coronavirus pandemic but of course resuming it as soon as it is possible doing.