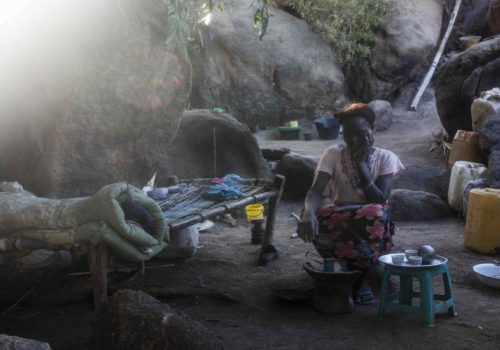 I am a photojournalist based in Juba, South Sudan. Last November, I reported on refugee camps in Yida South Soudan. The civilian areas of this region have been shelled at random by the Bashir government for the past year and a half. The locals have no choice but to take refuge in the mountain caves. Now that the dry season is here and the harvest was small, famine is imminent for more than 65,000 people residing in the refugee camp in Yida.
The Sudanese government has banned NGOs and journalists from South Kordofan, resulting in complete lack of food and medical assistance, as well as a severe lack of media coverage.  I spent three weeks with the rebels, traveling to meet the region’s locals. At the Yida refugee camp, I attempted to capture how a civilian becomes a refugee, beginning with the first moments inside the camp , the everyday lives, goes on despite the situation.
Camille Lepage

Photojournalist based in South Sudan, Camille Lepage moved to Juba with the idea of shedding some light on this country too often forgotten. After her Bachelor in Journalism, she went off to explore the daily life of the South Sudanese. She documents the building of a new nation that seemed doomed, as well as the obstacles they have to overcome to become a nation.
Internships and reportage have proved to Camille that photography is the best way to show dark realities that often remain forgotten. “A strong picture stays in the unconscious, we can reach every one sensitivity , no matter what their language, nationality or age are.”
Freelance for Agence France Press since her arrival in South Sudan, Camille brings visibility to this new country.