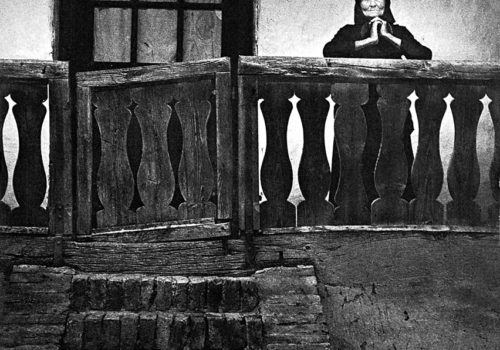 Last days to see Paralells, exhibition by Dr. János Szász (1925-2005) at the Supermarket Gallery in Budapest.

Due to my upbringing and to my take on life, it was after this that the words “NOT TO GIVE UP!” – words never declared, never written down – became the guiding principle of my life. Not to give in, not to let myself slip down the ladder, live in debauchery, or even, God forbid, to commit suicide due to “these people”, not even to defect the country (family members in Vienna and the US awaited me with apartments), but, despite all to stay in my home town and to raise our sons here.

Observing Dr. János Szász, the image of an outsider appears before us. This was the reason for his constant and unswerving use of the “Dr.” title, and the head bent slightly sideways draw out the outlines of a sceptically observant figure.

He was born in Pécs in 1925 into a wealthy local family. Due to his father’s army rank, the Socialist regime – which came to power during his last year at university – did not allow him to pursue a lawyer’s life, so he started making a living as a shop window dresser and graphic artist. Later, he went back to school to study photography, and  it is  at this point, at the end of the Fifties that his experimental phase began. At night, while his family was  asleep, he labored over his images in the bathroom-cum-darkroom, a 2,5 square-meter cubicle, where he found the time to elaborate a special procedure, during which he enlarged onto soft tone paper, then – with a brush, sponge or his own mix of chemicals added under a running tap – hardened these images. This is how he arrived at the dizzying contrast between white and black, yet this is how fine tonalities still appear in his jet black surfaces. On his photographs, the mundane sights of his hometown Pécs – snow-covered vineyards, an empty auditorium, freshly constructed blocks of flats – are transformed into graphic compositions. The uninhibited use of perspectives and the overriding formalistic composition also characterise Szász’s images.

The sense of loneliness, of being an outsider are visible on these images; it is with a unique sensitivity that Szász observed and captured solitude and solitary man. This is a recurring topic in his oeuvre. Maybe he even felt, to some extent, cosy with it all: it gave the man who was categorised his whole life as “amateur photographer” a driving force to create. As an outsider, he had the possibility  opening in all directions: this was how he – putting aside his inner resistance, as the photographer of the Pécs Architectural Bureau – could photograph, in a parallel manner both the new vanguards of the Socialist system so despised by him, and the disappearing wonders of folk architecture  threatened by this exact modernisation. This way, concrete becomes adobe.

It seems that maybe he was right all along: after his death his photographs made successful showings in premier exhibition spaces in London, Paris, New York, Berlin and San Francisco. His exhibition in Budapest got the title Parallels: the lonely contemplating artist searching for his reflection in both things he despised and he was strongly connected to. The parallels of Dr. Szász are not reduced to a photographer’s sensitivity to geometry; he found the key to survive in parallels.

One could be bitter, one could chide fate, but for what? As a playful twist of fate, it was just a few days ago that my greatly respected and dear friend, the excellent sinologist and paedagogue gave me the sole reasonable-heartfelt consolation and “absolution” for the life’s journey of three quarters of a century. “Think about it – he said, laying his hand on my shoulder – how much less eventful, less colourful your life would have been if everything had gone according to plan? Following the footsteps of your excellent grandfather, you would be an acknowledged and much-envied barrister, yet, in Pécs, not even a “star barrister”: for that you would have had to live in Budapest. You are a lawyer with a golden diploma anyways, and, apart from that, a photographer acknowledged by UNESCO with the AFIAP title, a founding member of the Mecsek Photography Club, etc. – and who could boast more than the Lifetime Achievement Award of the Hungarian Photographers’ Association; a prize that was won for the first time in our city?”