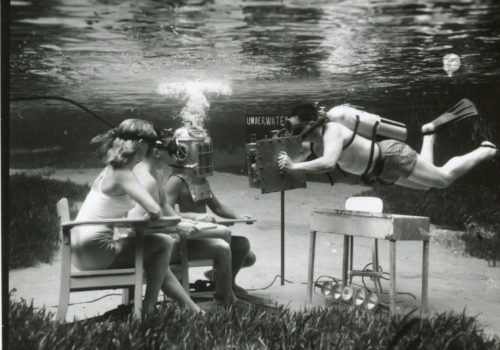 This story is 5 years old. Found by chance last week, I have no idea the reason for the non-publication at the time. Bruce Mozert is one of the greatest aquatic photographers, if not the greatest. Eric Kroll sent us this story.

Here it is finally, it is pure happiness.

How I “discovered” Bruce Mozert

I didn’t discover photographer Bruce Mozert. No one did, except maybe photographer/writer/professor of photography Gary Monroe who seems to rediscover all cool retro Florida things including Mozert, the Black Highway men painters, and other `outsider’ artists.

In April 2013, I was doing a story with my close friend, writer Javier de Pison for his publication Dental Tribune, the world’s dental newspaper (Hispanic and Latin American Edition) on mermaids. Javier lives in north Miami Beach and pays for my flight from Tucson to illustrate his ideas. In the back of our rental car were a half dozen obscure books on Florida including Gary Monroe’s Silver Springs the Underwater Photography of Bruce Mozert (University Press of Florida 2008). Javier and I drove up to Weeki Wachi and spent the day with 6 damsels with fins. We were driving back when I perused the Mozert book. He had done fantastic underwater scenarios in the 1930s, 40s and 50s including the `stills’ for the Creature From the Black Lagoon. I assumed he was dead. Nope. I went online and one could still buy an original (vintage) Mozert photo for very very little money. I easily convinced Pison to turn the car around and we drove 4 hours to Ocala, Florida then to neighboring Silver Springs. Within a mile of the dilapidated Silver Springs amusement Park was Bruce’s office!

When one walks into the Mozert studio one meets Evelyn Yorlano, his strong willed, wonderful secretary. In the corner of the front room were in fact vintage Mozert prints. I bought some. Bruce was recovering from a busted shoulder but we were invited to go meet him at the rehab center which we did. Betty Frazee, one of his 1950’s underwater models, was also visiting Bruce and both signed a 16”x20” vintage print Mozert had done of a (then) very young Betty Frazee barbequing a thick steak underwater!

I have returned as much as possible to Silver Springs, Fla to visit and bring others to Bruce Mozert and Evelyn. I called two days ago and Evelyn reminded me Bruce didn’t turned 100, just 99!