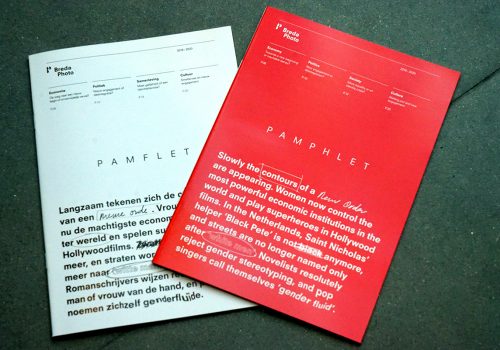 From the outset BredaPhoto has stimulated young talent within the framework of the International Talent Program (ITP). This year, the curators challenged 400 students from 6 countries (the Netherlands, Belgium, Germany, Czech Republic, Hungary & Finland) to work on the central theme “ The best of Times The Worst of Times” . A pamphlet full of statements from the social, cultural, economic and ethical world confronted them with the trials of the world. Ultimately, 10 projects were selected to be shown to the general public: a special opportunity for up-and-coming talent.

The young photographers may come from all over Europe, but their themes show a remarkable unity: they visualize the issues that are characteristic of their environment and their community.

Predictable is the theme “Coming of Age”: teens and twenties slowly let go of family life and their family, they look back on the past, they leave old friends behind and meet new people, they experiment and discover their sensuality and sexuality, they wonder what the future will bring, they step out of their familiar surroundings into a new world. We find this with Sam ten Thij (1994, HKU Utrecht), Zoe Sluis (1998, St Joost Breda), Kincső Bede, Jonas vander Haegen & Seppe Vancraywinkel (see below)

But there is also social involvement – in particular with regard to our living environment. Climate warming, what do we do with leaking nuclear waste or the silent dialogue with the animals can be found in Elias Kaus (LAB Lahti Finland), Alexander Rossa (1986, FAMU Prague) & Mateo Ancis (see further). Max Ernst Stockburger 1988 points out the consequences of the arms race (see below)

Renée Paule (1998, KASK Antwerp) plays with how we present ourselves. We insist on our individuality, but we just as easily identify with a group or leave our identities to conform in a uniform.

The story of Seppe Vancraywinkel (1998, LUCA St Lukas Brussels) is an ode to carefree friendship. He steps out of the world of everyday worries and loses himself in nature with his friends. They move outside the defined time: is it today, or 100 years ago? They hide in an Arcadian room, away from the others, away from obligations. Vancraywinkel succeeds in visualizing this simple life and evoking memories in each of us.

Max Ernst Stockburger (1988, UAS Bielefeld) collected 70,000 images about the preparation, the attack and the consequences of the nuclear bombs on Hiroshima & Nagasaki. The project is documentary as well as conceptual, completed as in progress, engaged as contemplative – thus it contains many contradictions and possibilities for interpretation. Stockburger himself is responsible for this: there are at least three ways to view the story

Kincső Bede (1995, Moholy-Nagy Budapest) was born in Romania just after the fall of the Iron Curtain, but where the ghost of the oppressive regime of Ceausescu is still very much present. For the elderly, scarcity, hunger and fear were normal, the young want to live a carefree life and build a new future. She depicts the generation conflict with humorous, alienating or downright surreal photos of her living environment and her circle of friends.

As with Norfolk & Thymann, the still video “Ghiacciaio di Planponteux” by Mateo Ancis (1998, NARAFI Brussels) deals with the climate problem. Ancis opts for a simple concept, but because of this his still video conveys his message in a very strong way.