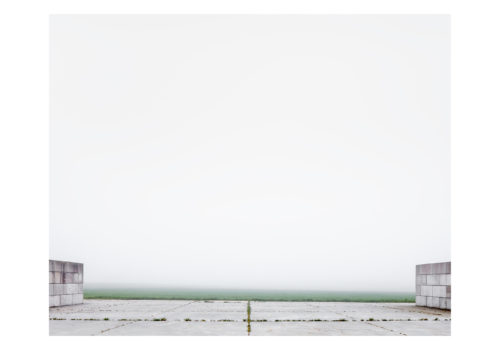 Landscape – as old as photography itself (along with still life, portrait and nude), but so diverse. From the imitation of the eye by the first photographers, over the first montages of Le Gray to objective observation of the New Topographics & the Düsseldorfer Schüle – always new angles, and the images reflecting the forms of expression. At first glance, the work of Paul D’Haese (1958) seems to have something in common with the objective approach, this is an illusion. On the contrary, the author’s images have something alienating, surrealistic.

Fascinating work deserves study. There is a strong systematic element in his approach – he is thorough, categorical and methodical. The shots are planned like a military operation: he studies the terrain in advance, creates the images, and if necessary repeats this action as many times as necessary until they are acceptable to his critical eye.

D’Haese follows the coast of Northern France closely, he walks the line, and that is also where he gets the title of his exhibition and publication. Borderline, boundary. Physical border between land and sea, the political barrier of the geographical entity ‘France’, half the country – because that is also the coast: a community on the coast literally lives on only half of the territory, a border between the accessible and the forbidden, as in Tardi’s “Ici Même”. Borderline ultimately also refers to the camera, which forms a line between reality, perception and the recorded, the final border is the separation between reality and the observer.

The author was trained as an interior designer, and this is the key to a different approach: he wants to grasp the totality, and in his démarche goes further and further. He is not content with just depicting, but supplements his images with 3D models. He then photographs them again and gives them a place in the overall vision. Is the spirit of a 19th century encyclopaedist living in him, who wants to encompass and control the totality of knowledge about an area?

Paul D’Haese has been photographing since an early age, and followed several photography courses. He particularly enjoys the critical dialogue with other image-makers. He experiences the digital revolution as a liberation. No more hassle in the darkroom, for the first time one can really concentrate on the image and only on the image.

The systematic approach we mentioned earlier can also be found in the book Borderline – it contains at least 165 images taken in 60 municipalities between the French-Belgian border and Le Havre. The composition of the book is also completely balanced, down to every detail; with its beautiful format (28.5 x 24), you never get the feeling that the image is subordinate to the layout. Except for one image, D’Haese shows a desolate world, devoid of any human presence, and even the number of vehicles can be counted on one hand – though I assure you they are there! It also contains two texts, a preface by Dirk De Wachter (psychiatrist, professor and art lover) and an accompanying text by colleague Jean Marc Bodson. Both texts are published in the author’s mother tongue (Dutch & French respectively) and are both translated in English. Here two points of criticism: personally, I would have preferred a trilingual edition, and unfortunately, a crucial sentence by Bodson loses its meaning in the Dutch translation on the back cover, but this is only a detail.   I assure you, with every reading you discover a new aspect in the book, and in my opinion it is one of the must haves or reads of 2021.

In my mind I compare D’Haese’s work with the images of that other Belgian Filip Dujardin, who constructs a new reality. D’Haese has nothing to do with this: he manipulates nothing, no Photoshop, he distils his empty illusion from reality. The result is a very strong body of work, which was deservedly awarded the prize by the Minister of Culture at the 18th national competition Photographie Ouverte.

He describes his images of buildings as ‘portraits’. It breathes the seaside, and is now on display at the Charleroi Photography Museum until 19 September. Without rancour, it is out of place: it MUST be exhibited on the coast, in the place where it was created. Paul D’Haese is telling us a lie, as described by Picasso in an interview (in Spanish and published in English in 1923) “Art is a lie that makes us realise the truth”, “l’Art est un mensonge qui nous fait saisir la vérité”.

Can’t make it to the exhibition? Then the book Borderline is an absolute must – it appeared in 2 editions:

We published Paul D’Haese already in