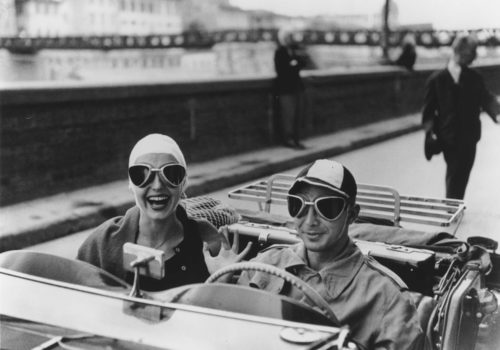 You probably know the image. It adorns the walls of Italian restaurants all over the world. A beautiful young girl, clutching a shawl draped over her shoulder, walks past a group of men, who are all staring at her. You may not know the photographer, Ruth Orkin, who – then only 29 years old – took the image after a chance encounter with a 6ft tall, 23-year-old American woman.

Recalling the meeting, Orkin said, “I had met Jinx Allen, like me travelling alone through Europe, at our hotel in Florence in 1951, and asked her to do a scene. The first time she walked through that gang of men loitering

on the street corner, she clutched at herself and looked terribly frightened. I told her to walk by a second time ‘as if it’s killing you but you’re going to make it’. That’s all I needed, two exposures. It was a year before anybody published it – it was probably too risqué at the time.”

The photograph, American Girl in Italy, became Orkin’s most famous image. It was part of a series that Orkin called Don’t Be Afraid to Travel Alone, and was first published in Cosmopolitan – alongside an article titled, ‘When you travel alone… tips on money, men and morals’.

The image was then used in an advertisement for Kodak, encouraging young photographers. It was from that poster, blown up on a huge board in Grand Central Station, that Jinx (who, by then, went by Ninalee Craig) first saw herself as the ‘American Girl in Italy’. “It horrified my father,” she remarked, “He had no idea I was walking around Italy in that way.”

The controversy of the image remains, and is perhaps more relevant than ever: does it depict a woman being admired or harassed – or even both? Craig later said that she saw herself as “Beatrice walking through the street of Florence. I felt that any moment I might be discovered by Dante himself.”

French photographer Robert Doisneau). By the time she had shot American Girl in Italy, Orkin had already established herself as a pioneering female photographer and filmmaker, in a world that was dominated by men. Now, in celebration of the centennial year of her birth, a selection of works from Orkin’s impressive career will be offered in an online sale at bonhams.com from 22 January 2021.

Born in Boston, Massachusetts, Ruth Orkin grew up in Hollywood during its Golden Age. Her mother had a career there as a silent-film actress, but her father was manufacturer of toy boats. She received her first camera

aged 10. By the time she was 14, she was making portraits of her classmates for $1 apiece, and at 17 cycled across the United States, from Los Angeles to New York City, to see the 1939 World’s Fair – taking little more than her camera.

After briefly studying photojournalism at Los Angeles City College, in 1940 Orkin became the first messenger girl at MGM Studios. She had hopes of becoming a cinematographer, yet, on telling the head of the cinematographers’ union of her ambitions, he laughed: “Before we ever let a woman in the union, we’ll let in Marlene Dietrich.” The star had been taking 16mm pictures of her children at the time. Undeterred, Orkin joined the Women’s Army Auxiliary Corps in a second attempt to gain training as a filmmaker – an opportunity promoted in the recruitment campaigns. However, her hopes were unfulfilled. “That’s when I decided to become a photojournalist,” Orkin commented. “There wasn’t any union to keep out women.”

In 1943, Orkin moved to New York. By night, she worked as a nightclub photographer, and by day she shot baby pictures, all while saving for her first professional camera. The 1940s saw Orkin work for all the major US publications. She photographed many notable names, including some of the greatest musician of the era – Leonard Bernstein, Isaac Stern, Aaron Copland, Jascha Heifetz, and Serge Koussevitzky – as well as other significant cultural figures, not least Orson Welles and Alfred Hitchcock. In 1951, LIFE magazine sent her to Israel with the Israel Philharmonic Orchestra. From there, she travelled alone across Europe, taking many of her most- famous images, including American Girl in Italy.

On her return to New York, she married fellow photographer and filmmaker Morris Engel. It was alongside Engel that she finally got to live her ambition of being a filmmaker. Together they produced two feature films: Little Fugitive and Lovers and Lollipops. The former, which starred a young boy alone in Coney Island, was nominated for an Oscar in 1953. It also won Orkin a Lion of San Marco at the Venice Film Festival in the same year – making her the first American woman to receive it. The great French nouvelle vague director François Truffaut was even quoted as saying that “The French New Wave would never have come into being if it hadn’t been for Little Fugitive.”

Orkin would live out her later years photographing marathons, parades, concerts, demonstrations, and the changing seasons, all from the window of the New York apartment, overlooking Central Park, that she shared with Engel. The images were the subject of her widely acclaimed book A World Through My Window, published in 1978.

Orkin’s career, and especially the image American Girl in Italy, gained a new lease of life in the 1970s, when Orkin was the subject of retrospectives and the feminist movement was gaining traction. “I’ve always done what I wanted to do” was Orkin’s reaction. Indeed, she was never a woman to take no for an answer. Her works are often a balanced mix of intimacy, warmth and boldness, with a real sense of fun. She was, of course, much more than the photographer behind that one image, yet it defined all the qualities of her work, and was in itself a metaphor for her life – a woman making her own path through a man’s world, head held high.

What became of the American Girl in Italy? “I wouldn’t say the picture changed my life,” Craig said, “but I’ve had so much amusement from it over the years… And more free meals at Italian restaurants that you’ll ever know”.

The Photographs of Ruth Orkin (1921-1985): A Centennial Celebration