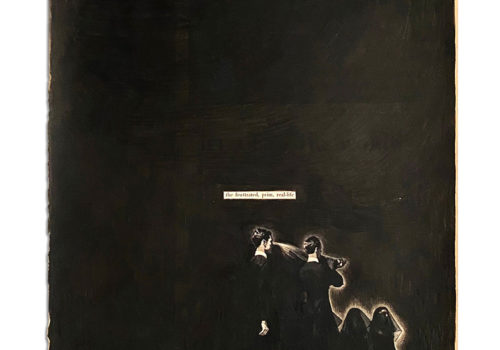 Whilst thinking of Bruges one usually associates the beautiful city with the canals, the medieval atmosphere, the Venice of the North – and not immediately with contemporary art.

However, there are a few strong players who always provide a good offer of exhibitions and initiatives. One of them is the Black Swan gallery, located on the magnificent Lange Rij, the inspired initiative of Kristoff Tillieu and Lieve De Cuyper. Their latest exhibition is more than worth it – but first an introduction.

The ‘found object’ has its own place in art history: one author refers to Duchamp and the other to the Cubists. It is not so much relevant to indicate who was the first, but it is certain that around 1910 the ‘found object’ in the broadest sense of the word crept into art production. With the cubists, such as Gris, Picasso & Braque ca 1911, with the montages/collages of the Dadaists from ca 1915 onwards, or as Fountain (1917) the ready-made of R. Mutt, ( actually Marcel Duchamp (1887-1968), or was it more likely Baroness Elsa von Freytag-Loringhoven (1874-1927) as the original author of the object) – for each of these movements the period 1910-1917 was the turning point.

In the ‘classical’ art world, the techniques mentioned above are frequently used afterwards: think of pop art that is strongly influenced by the Dada movement, but also of Tracy Emin (1963), with her ‘My Bed’.

In photography, the situation is somewhat different. It was not until the end of the 1970s that attention was paid to the ‘found image’. The emphasis here lay on vernacular photography, in which the anonymous found image of the high street photographer or the inspired amateur was valorised and even given museum value – we are thinking for example of early publications by Michel Frizot or Amérique au fil des jours from the PhotoPoche series.

In the same period, artists also started appropriating images and refotography was introduced. One of the most famous (and controversial) examples is Richard Prince. In addition to refotography, artists also started to make use of the found photographic image to integrate it into their own artistic project. And here we reconnect with the current artistic events of the exhibition in Bruges.

With the title ‘Savoir Retenir et Fixer ce qui est Sublime’, the Black Swan selected four international artists: Marianne Csáky, Tamara Dees (Nl, 1971), Simon Verheylesonne (Be, 1991) & Guy Vording. The title refers to a work by the renowned Belgian photographer Marie-Jo Lafontaine (1950) questioning whether images capture and can transmit the sublime. All selected artists start from found images, which they edit, scrape, add elements to, manipulate in their search for their description of the sublime. In our review, we want to take a closer look at two of them.

Guy Vording (1985) is a young Dutchman, who was discovered during Art Rotterdam 2017.His starting point are old Life magazines that he collects. He looks at the images and then make a cut out. With pencil or black ink he wipes away information, or draws a context to it. He reworks the text block, the legend under the image, in an identical way. The result is what he describes as ‘Black Pages’, sheets of paper that challenge the viewer, make him/her think, make him/her smile or move him/her.

In the exhibition, there are also some works that he describes as ‘Vanish into thin air is more polite’. Here he applies the decoupage technique.

He touches on a very diverse range of themes, sometimes social, sometimes personal. He takes on political decision-making, social position, the rat race, materialism, existential pain, depression, loneliness, gender and identity, sometimes with a cynical inaudible laugh, but always with virtuosity. Because the images were cut out of magazines from the period 1930-1970, they are permeated with nostalgia and evoke the atmosphere of Hollywood, of the Film Noir, of glamour, the American Dream & … the American Nightmare.

Marianne Csáky (1959) is a renowned Hungarian artist with a very diverse oeuvre in terms of both theme and approach. A sculpture entitled Symposium (1990) from the beginning of her career is an unmistakable statement: androgyny and Eros and Thanatos combined in one image.

Her grandfather was forced to live on a self-sufficient farm in 1956, and that is where Marianne Csáky grew up, together with her brother. Her grandfather produced hides, among other things, and they also appear frequently in the art work of the artist.

However strong her oeuvre may be, we chose her ‘photographic’ work. Csáky looks back on her past, on her relationship to her mother, we see her grandparents and her now-deceased brother with photo and film images from the rich family archive of the grandfather. By combining images in Time Leap, she crosses the boundaries of time and space and enters into a dialogue through images where words were never spoken.

In the series Time Tunnel, she continues an (unspoken?) dialogue in the present. She places herself and an unidentified person in confrontation, and we see in an image how both of them move. Here too, Csáky plays with the concept of time, and she tears down the boundary between photography and the cinematic. A remarkable work that should be more widely known!

A book by art historian Erzsébet Tatai about Marianne Csáky’s work is presented at the exhibition. It analyses her work chronologically and is well illustrated. It deals thoroughly with the themes of her work and is recommended literature for every artist and art lover who is interested in memory, time, image, nudity, pornography, death and the body.

This book is available through:

This second book is available through: