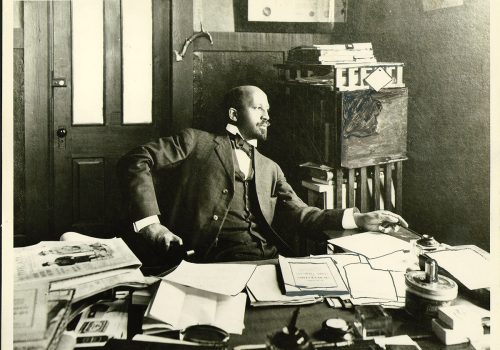 A new book from Redstone Press: an album celebrating W. E. B. Du Bois and his legendary exhibition of African American life following the abolition of slavery.

At the 1900 Paris Exposition the pioneering sociologist and activist W. E. B. Du Bois organised an exhibit demonstrating the progress of African Americans since the abolition of slavery. In striking graphic visualisations, hand-drawn charts, maps and photographs he showed the changing status of a newly emancipated people across the United States and more specifically in Georgia, the state with the largest Black population.

The photographs in ‘The American Negro Exhibit’ were drawn from African American communities across the US. Both the photographers and subjects are mostly anonymous. They show people engaged in various occupations, in study and training, and posing formally for group and studio portraits. Elegant and dignified, they refute the degrading stereotypes of Black people that were prevalent in white America.

W. E. B. Du Bois became the most influential Black civil rights activist of the first half of the twentieth century. His exhibit at the Paris Exposition continues to resonate as a powerful affirmation of the equal rights of Black Americans to lives of freedom and fulfillment. This beautiful new book reproduces the photographs alongside the revolutionary graphic works for the first time, and includes a marvellous essay by two celebrated historians, Jacqueline Francis and Stephen G. Hall.

Well, I grew up in a little village in Arkansas, during the ‘30s and ‘40s. Everything was segregated. And so the black school which I attended had black teachers and we used books about blacks when we could find them. And of course, W. E. B. Du Bois was one of the great heroes in our world. We were so proud of him. Then I moved out to California to my mother. I got a scholarship to a college. And they said that Dr. Du Bois was coming to speak. I went home and told my mother, I must go, although it’s night, and she must take me. Because they had invited Dr. Du Bois and all those people are white, they don’t know Du Bois is black. I was so sure that they had no idea. And Dr. Du Bois came up the side aisle, against the wall. Fortunately, by 15, I was almost six foot, so I could see, and I thought, “Oh, my goodness, they’re going to see he’s a negro. Will they get up and walk out?” No, they stood up and applauded. That was over 70 years ago. I have not forgotten it.

With a foreword by SIR DAVID ADJAYE OBE

And a note on the photographs by HENRY LOUIS GATES JR