Bill Biggart: Until the final image 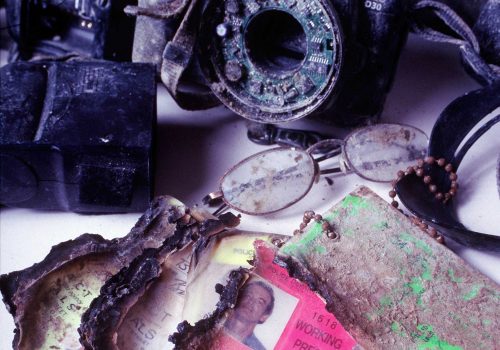 Bill Biggart was the only journalist casualty in the 9/11 tragedy of the collapse of the World Trade Center. He became a photographer very early in life. On that day he was carrying three cameras one of them digital, he had just bought. Unknowingly he covered the last big event on films. Bill was very bold ,when the first plane hit the World Trade Center he said good by to is family pick up his cameras and walked the twenty blocks to the building on fire unlike any other photographer he got too close, he was killed when the second tower collapsed.

Wendy Doremus his wife had called him to give him the information that it was a terrorist attack. He told her not to worry he felt safe with the firemen, he asked her to meet him at his studio some twenty minutes latter he never made the appointment. Equipped on this day with the two technologies he shot 6 rolls of films and 150 digital images

It was a miracle, when he was found 4 days after the attacks they also found his cameras and his press card. Photojournalist are always harnessed with their equipment.when I went to the mortuary everything was there I was traumatized his soul was in his cameras. Wendy was first apprehensive ,she hesitated but pushed by the passion of her husband she finally had the films processed and looked at the pictures one by one. All have great historical value. On the digital images there is the exact time and date until the last one.

Bill Biggart loved the streets , those of New York and those of the many cities he visited.He had travelled extensively and worked alone and had a strong interest in minorities. “He was very sensitive to the rights of the african american”, recalled Wendy Doremus He would have been proud to see Obama President, even though is first bet had been for a woman president .

He took on many fights , he covered the fall of the Berlin wall , Northern Ireland and the palestinian cause. He used to say « I could move to Jerusalem and have enough to talk about for the rest of my life ». September 11th is a corner stone in the history of photography the last event before the all digital. Bill loved films he gave his life to it. He loved the technique from the noise of the shutter to the processing of the film. He loved the magic of the still camera and always kept one at the foot of the bed. When digital camera arrived he was furious he hated the technology. He said it would kill the profession.