Bigaignon : Harold Feinstein : Life as it was 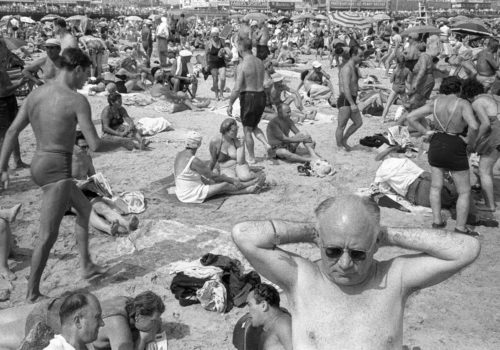 Immerse your eye in the happy nostalgia of one of the most talented American photographers of his generation, Harold Feinstein, this is what Bigaignon is offering at the start of 2022! After two first remarkable exhibitions in 2017 and 2018, the Parisian gallery completes what it had announced as a trilogy, with this exhibition entitled “Life as it was”.

If the first part of the retrospective devoted to the American artist who died in 2015 honored the contagious optimism of the photographer as he depicted the youth and carelessness of the post-war period, the second gave to see a selection of photographs taken between 1964 and 1988, immortalizing special moments in the lives of New Yorkers. A real dive into the daily life of his contemporaries that this new selection completes, taking up again photographs taken between 1949 and 1988, and depicting life as it was, “Life as it was”, giving pride of place to singular people. of all ages, from all walks of life.

A worthy representative of the New York School of Photography, Harold Feinstein works covered over nearly six decades, a period during which he strived to give an intimate portrait of an exuberant America full of vitality. Whether on the promenade along the beaches of Coney Island, or in the effervescent streets of Manhattan, Harold Feinstein’s photographs bear witness to the daily life of his compatriots and once again attest to the talent of the artist. . Grace and spontaneity are at the heart of his shots and his mastery of composition is more evident than ever.

This new selection of 16 black and white photographs, both rich, diverse and overwhelming with joie de vivre and humanism, transports us to what the artist defined as “a little photographic journey bearing witness to the beauty and mystery of this human life” and are supplemented throughout the exhibition by a series of screenings of the documentary entitled “Last Stop Coney Island: The Life & Photography of Harold Feinstein” produced in 2019.

Finally, a color photograph, never shown before, closes the exhibition. In this image, a real gem, between perfect composition and exceptional play of light, which is reminiscent of Hopper, Harold Feinstein depicts loneliness, as if the artist wanted to show us through the use of color, what the modern world was becoming.

About the artist: Born in 1931, Harold Feinstein began photography in 1946, at the age of 15. Sure of his vocation as an artist, he left school at the age of 16. The following year, he was alongside Sid Grossman, the youngest member of the Photo League. Harold Feinstein is also famous for being the youngest photographer to enter the permanent collection of the Museum of Modern Art (MOMA) in New York since Edward Steichen acquired one of his photographs in 1950 on behalf of the museum of which he was the curator. A rising figure in the New York avant-garde of street photography, his first major exhibition took place in 1954 as part of a group exhibition at the Whitney Museum of American Art. He had his first personal exhibition the following year at the Limelight Gallery, one of the first galleries entirely devoted to photography.

Since then, his photographs have been the subject of multiple exhibitions and are part of prestigious private collections and permanent collections of major American museums, such as the Museum of Modern Art, the International Center of Photography, the Museum of Photographic Arts, the New York City Museum, the Jewish Museum and a dozen other institutions.

In 1952, Harold Feinstein was drafted into the infantry to serve in Korea and had the opportunity to offer an intimate look at the daily lives of young conscripts, from training camps to the front lines and local villages. On his return from Korea, he settled in the legendary “Jazz Loft” in New York, where he met the painter David Young, the musicians Hall Overton and Dick Carey, but also and above all the photographer W. Eugene Smith, with whom he actively collaborated on the layout of the famous Pittsburg Project.

Coney Island was his favorite territory, and he gave a mischievous look of the life in his native New York. However, if his post-war shots depicting seaside celebrations are the best known, his photos of nudes, still lifes or the Korean War testify to his great sensitivity. In 1998, Feinstein paved the way as a one of the first photographers to use a scanner as a camera (a technique now called scanography). At the age of 80, he received the Living Legend Award from the Griffin Museum of Photography.